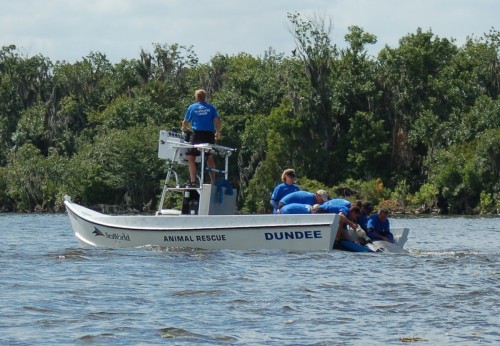 Lil’ Joe ain’t so little anymore. The Manatee, rescued by SeaWorld Orlando and returned to health by SeaWorld’s animal care team, grew to 1515-pounds before being released into Lake Dexter in Astor, Fl. There Lil’ Joe will find several other manatees who will help him get acclimated to his new environment.

The SeaWorld team also fitted him with a tracking device before the release so that his health can be monitored. After the release, Lil Joe was seen nibbling on nearby vegetation, which is a good sign.

As SeaWorld moves further away from its alcoholic beverage related ownership ties and toward a conservation based future, the park needs to make the most events like this and tie it into a reason to visit the parks. Perhaps a Sea Animal Rescue and Release show that highlights the tools and technology used to rescue and care for all sea life.

In other news, SeaWorld and Busch Gardens Tampa have ended their fun card promotion for Florida and Georgia residents.