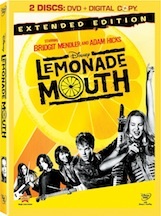 This is Disney Channel’s hope of starting a new franchise. The feedback I’ve been getting is pretty good, so I can’t wait to get a copy on DVD and see for myself.

In addition to featuring 10 awesome original songs from the No. 1 soundtrack, the exciting Lemonade Mouth: Extended Edition DVD release includes an exclusive extended performance of “Livin’ on a High Wire” and an exciting “Rock-Along” version of the movie that allows fans to sing along, with lyrics to all the songs, appearing on-screen. Both features are available only on the DVD that debuts in the US on May 24, 2011 (Canada on May 17, 2011).

Synopsis and more below the cut:

This spirited, music-driven movie introduces an unlikely ensemble of five students — Olivia, Wen, Stella, Mohini and Charlie – who, after meeting in detention, gradually realize their shared musical connection and belief that it’s time for the students of Mesa High to stand up and be heard on things big and small (ranging from the school Principal’s exclusive support of the athletic programs to the removal of the popular organic lemonade from the cafeteria). Ultimately, as they open up to each other and form friendships, they start a band — Lemonade Mouth — that soon resonates with students sidelined by the high school elite. However, not everyone in the school is ready to cheer them on, especially since the popular rock group Mudslide Crush is determined to maintain their headline status and win the coveted Rising Star music competition.

Based on the book Lemonade Mouth by Mark Peter Hughes and directed by award-winning Patricia Riggen (La Misma Luna aka Under the Same Moon), executive-produced by Debra Martin Chase (The Sisterhood of the Traveling Pants, Disney Channel’s “The Cheetah Girls” movies), co-produced by Gaylyn Fraiche (Just Wright, Sisterhood of the Traveling Pants 2) and choreographed by Chris Scott (TV’s “So You Think You Can Dance”).