I recently discovered Many Eyes, a nifty little tool for creating infographics. After playing around for a little bit, I decided to create a visualization of some Disney info. This infographic shows the ten Disney Animation Studios films with the highest gross revenues. It should come as no surprise that The Lion King takes the top spot. However, I was a little shocked to see titles like Chicken Little. Then I realized it made sense given the release dates of the films.  As you can see, no Disney movie released before 1990 made the cut. 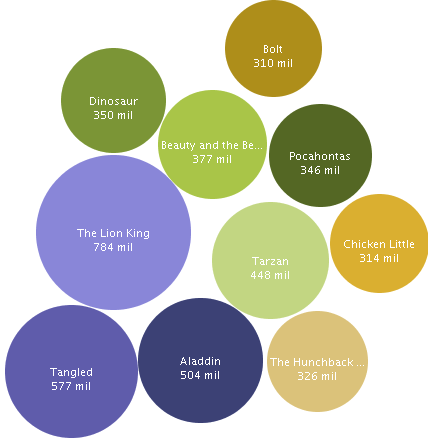 Of course, if you take inflation into account, things look a little different. Snow White and the Seven Dwarfs is the #10 all time film (and #1 for animated films) earner for domestic grosses with $856,740,000, 101 Dalmations comes in at #11 785,349,600, and Fantasia comes in at #21 with $652,721,700. These box office numbers are helped by the frequent in theater re-releases that was common before VHS and DVD players became ubiquitous in households.

Do you think these 10 movies are worthy of their high revenues?