It’s been a long time since I’ve posted about Extreme Makeover: Home Edition. I used to watch the show religiously, but I deleted it from my record list about two seasons ago. It was some combination of the show hitting the same emotional tones over and over and changes in my life. But the EM:HE continues to draw decent ratings, albeit the last two years have been mid-pack instead of leading the ratings. 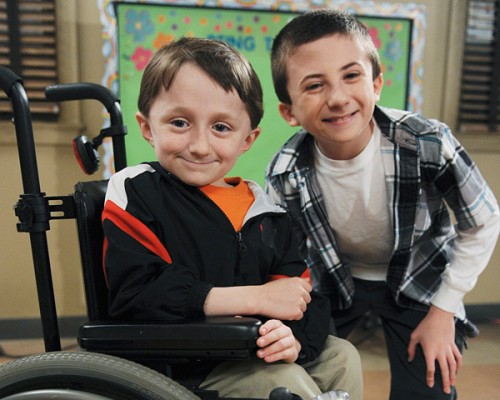 One of the reasons for continued decent ratings is because of shows like this one scheduled as the Season Finale on May 15. That show features the Sharrock Family. Patrick and his parents, Cindy and Michael, were flown to Hollywood so that he could meet his own personal hero, the young actor Atticus Shaffer from the hit ABC comedy series, “The Middle.” The two are pictured above.

Like Patrick, Atticus also has a form of brittle bone disease. Patrick once expressed his admiration and pride for Atticus and how he’s been able to do so much with his life. Atticus and the cast of “The Middle” were thrilled to have the Sharrocks visit their set, and provided them with surprises and memories that will last a lifetime.

Do you still watch “Extreme Makeover: Home Edition”? What about ABC’s “The Middle”?