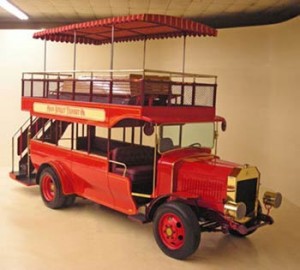 Disneyana fans get your wallets (and probably your second mortgage) ready. A rare piece of Disneyana has come on the market. This double-decker bus was one of six such buses used at Walt Disney World’s EPCOT Center as part of an in-park transportation system. It has been restored and is now for sale in North Carolina for a cool $400,000 USD.

The site seems to indicate that was originally built for Disneyland in 1956 by Disney Studios. Can anyone verify that? (Apparently the answer is yes!)

$400,000 is a pretty amazing figure considering the much more collectible Disneyland submarine was sold for somewhere around $200,000 (if my memory serves me right). But if you have the cash, this would be a fun vehicle to add to your fleet. Just promise to give me a ride.