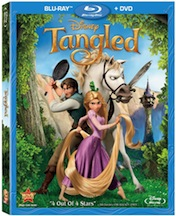 Tangled, the 50th feature from Walt Disney Animation Studios is destined to join the ranks of Disney Classics. It has likable characters, great sidekicks, songs that appear to have that timeless element, and a story that will withstand the test of time without seeing out of place. The movie also features a style of animation that I believe has captured some of the artistry of the original hand drawn classics, why combining the new depth of field that’s capable with digital animation. All in all it’s a great template upon which to build future Disney animated films.

You all know the story: When the kingdom’s most wanted—and most charming—bandit Flynn Rider (voiced by ZACHARY LEVI) hides out in a mysterious tower, he’s taken hostage by Rapunzel (voiced by MANDY MOORE), a beautiful and feisty tower-bound teen with 70 feet of magical, golden hair. Flynn’s curious captor, who’s looking for her ticket out of the tower she’s been locked away in for years, strikes a deal with the handsome thief, and the unlikely duo sets off on an action- packed escapade, complete with a super-cop horse, an overprotective chameleon and a gruff gang of pub thugs. Tangled is a story of adventure, heart, humor and hair—lots of hair.

Which brings me to the DVD Blu-Ray combo pack I was sent to review. I love the that you get both a DVD and a Blu-Ray in the package. This allows me to have a Blu-Ray disc for when I eventually own one. But Disney needs to do more to share bonus features across both discs. For now, all I can say is that the bonus features on the Blu-ray sound great. But I just can’t see them. I, of course, miss the Director’s commentary. That should be standard for any Disney DVD if you ask me.

The copy of the DVD I reviewed had excellent color and sharpness of detail. Although the film was available in 3D in theaters, it doesn’t really lose anything when viewed in 2D. There is a 4 disc version that includes the 3D version if you have a 3D TV at home, or plan to buy one in the future. That’s also the only version that includes a digital download for your portable device.

DVD and Blue-ray Bonus Features and a special look and some concept art from the film below the cut:

Blu-ray
· Untangled: The Making of a Fairy Tale – Exactly how long is Rapunzel’s hair? How many lanterns were used? Where did Pascal’s name come from? Which Disney animated feature first utilized CG animation? These and more will be answered when Mandy Moore and Zach Levi take viewers on a kooky behind-the-scenes tour to learn how the filmmakers styled this film’s “Golden Tresses.”
· Deleted Scenes – Co-directors Byron Howard and Nathan Greno introduce three scenes and illuminate why they were ultimately cut.
— The Jaunty Moose
— Chemistry Develops
— “Vigor The Visionary”
· Extended Songs – The complete versions of two great songs are shared in a unique feature that explains the co-directors decision to scale them down.
— “When Will My Life Begin”
— “Mother Knows Best”
· Two Original Storybook Openings – Two alternate versions of the film’s opening sequence described by co-directors Nathan Greno and Byron Howard.
· 50th Animated Feature Countdown – A video montage celebrating Tangled as the 50th film to join The Walt Disney Studios’ prestigious lineup of classic animated features.
· 9 Tangled Teasers – A collection of the most unique and quirky commercials made for the theatrical release of “Tangled.” Some are spoofs based off of infomercials and/or breaking news, some are teasers and others are simply just funny filmstrips.

previousZooey Deschanel sings “So Long” from Winnie The Pooh
nextDancing with the Stars: Blast from the Past