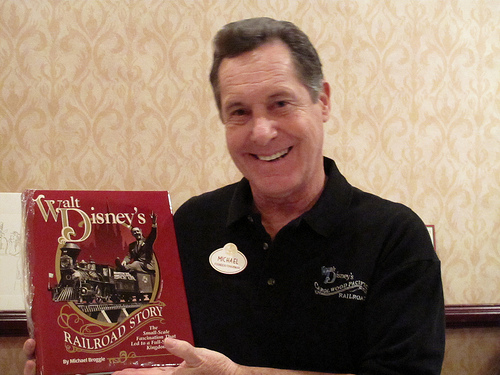 It was fitting that as I interviewed Michael Broggie and his wife, Sharon, I did so next to a set of railroad tracks as a 1913 Baldwin 2-8-0 came chuffing into the Fillmore train station for the 12th annual Railfest held at the Fillmore and Western Railway in Southern California.

Broggie’s father, Roger, was Walt Disney’s first Imagineer. He’s also the man that built Walt’s miniature train set that went throughout his backyard, tunneling under his wife Lilian’s flower bed and provided the inspiration for so many generations of Disney train fans.

So it was that Michael Broggie wrote the story of Disney’s trains after his own career writing movie publicity for Disney. Broggie was the one who came up with the title “The Love Bug” for the movie about Herbie, the Volkswagen bug. With Sharon working as his executive editor, his seminal work is a book called “Walt Disney’s Train Story” and in it, he documents how Walt was so influenced by the trains that came roaring through his hometown of Marceline, Missouri, every 22 minutes. “It had a big effect on him,” Broggie said. “It really was a cornerstone of his life.”

Broggie should know. There is a fine photograph in the book of a 12-year old boy standing astride the E.P. Ripley with Walt at the controls. The train is one of Disney’s steam engines for the Disneyland Railway, still in operation today. Broggie is that 12-year old.

“Four generations of my family have worked for Disney,” said Broggie. “My son Garry is now head of the machine shop at Disney studios where his grandfather, my dad, was in charge 60 years ago.” The Broggies were with Walt in the beginning and they’re still working at Disney today.

Broggie himself worked at Disneyland on the rides and attractions through college. He graduated with a degree in journalism and then went to work writing for Disney. “I remember asking him how he did all that,” said Broggie. “When I was 12, I asked Walt how he was able to build so many of these things and make it all work.” The answer became an inspiration that lasted a lifetime for Broggie.

“He told me that it really came down to four words and all of them began with the letter ‘c,’” Broggie said. “Curiosity, confidence, courage and constancy. I never forgot that.” In fact, Broggie turned it into a short book called “Walt Disney’s Words of Wisdom,” which he published in 2010. “He was an amazing teacher,” Broggie said.

Broggie has just finished touring the U.S. with his books. “It’s what Sharon and I call retirement,” he said. But he’s home now, watching the next generation of Broggies turn the impossible into reality.