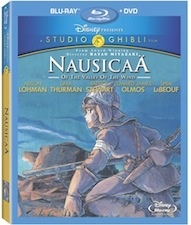 Nausicaa of Valley of the Wind was the first feature film Hayao Miyazaki directed after forming Studio Ghibli. Although animation has progressed a lot as an art form, Nausicaa holds up against the latest stuff as well as Snow White and the Seven Dwarfs does against the best of modern Disney animation, which is to say admirably. 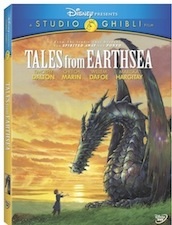 Tales from Earthsea is the latest film from Studio Ghibli and the first film from Hayao Miyazaki’s son, Goro. Under Goro’s direction, EarthSea echos many of the same themes from Nausicaa while maintaining the amazing artistic standards that his father helped develop. As such, the two make a great pairing for a double-feature should you be so obliged.

Let’s get some of the technical details out of the way. EarthSea is available on DVD only, while Nausicaa has a DVD/Blu-Ray Combo pack option. Both feature Disney led dubbed English soundtracks featuring many actors whose names you will no doubt recognize, if not their voices. I found the color and animation in each to be rich, particularly the cities in EarthSea and the amazing creatures of Nausicaa.

Nausicaa is literally about the struggle to restore the balance between humanity and the Earth. It foresees a time when the Earth has been poisoned by humanity creating toxic forests that are slowly taking over the world. Remaining groups of humans fight over remaining resources while hope remains in the heart of Princess Nausicaa for a world where the Earth can be healed and humanity can co-exist in peace.

EarthSea explores the worlds of EarthSea as created by stories of Ursula Le Guin. Again, the balance of life on Earth has been shifted. A chain of events is set in motion that could result in the end of life on Earth, or balance being returned. The movie story itself is choppy and harder to follow than it needed to be, but the emotion is there and the message is delivered, even if it’s with a hammer instead of a brush.

You don’t have to look too far to see parallels to both film in the current events of Japan (or indeed past events). Humans again risk spoiling the balance of Earth, this time with radio-active poison. It’s up to a few heroes to do the hard work that may involve the ultimate sacrifice and get the job done. Throw in a hang-glider and a few walking buildings, and you have the prototypical Miyazaki film right there.

Both Nausicaa of Valley of the Wind and Tales from EarthSea are available online and in a store near you today. I hope you’ll consider adding these wonderful films to your collection. Support one of Japan’s true treasures in Studio Ghibli and gain a little insight into the world of balance that Miyazaki wishes for us all.