Update: It’s not that often, I’m made to eat my words so quickly… but check out this twitpic from @GDPInvestigator – http://twitpic.com/439m6g Looks like a new sign was installed in the last few days. Have to say that’s a vast improvement over what I complained about below. Anyone know if they’ve fixed the menu item issue? Cheers all around if they’ve fixed that too.

The recent switch of the under utilized El Pirata Y El Perico counter service location to Tortuga Tavern encapsulates what Disney does so right and what is so wrong with Disney all in the same spot. A new overlay ties the restaurant directly to the recent Pirates of the Caribbean movie franchise and converts that section of Adventureland into a whole Pirate mini-land. Yet, at the same time, something went significantly wrong.

Let’s start with some of the good stuff.

The paint and decor on the exterior of the location has been upgraded. This includes some new props and pirate flags. Little touches like the painting details on the capital of that column are another example. 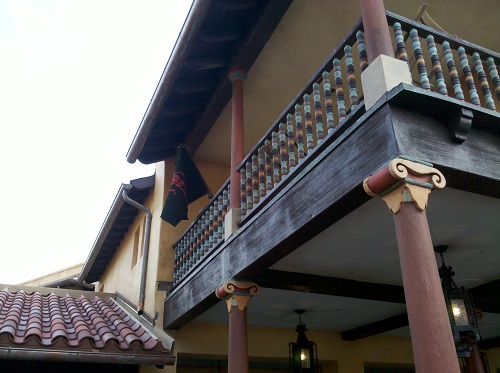 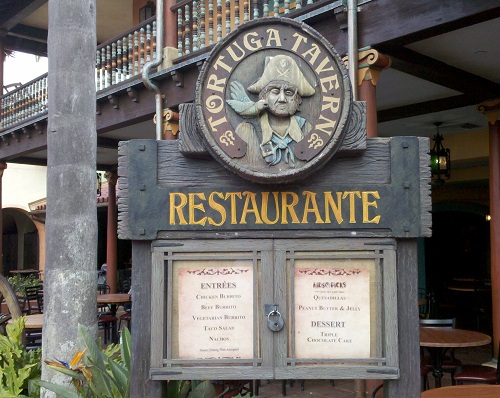 It was obvious enough that even my 7 year old son picked up on it. The great detail work on the exterior was continued inside the restaurant. This sign isn’t very Disney friendly, but it is right on theme for a Pirate’s tavern. Inside the salsa bar room, they’ve added some new theming from the Pirates movies. 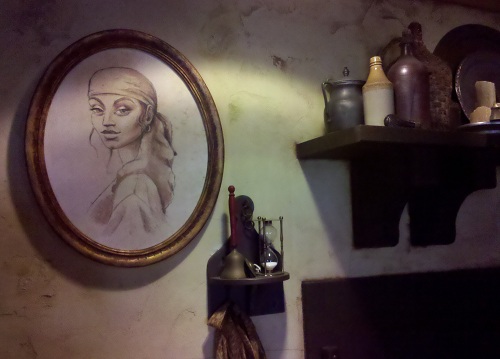 Including this great little tableau listing passengers on The Black Pearl and Queen Anne’s Revenge is another example of Disney doing an excellent job of storytelling through details. However, this appears to be a spoiler for the upcoming Pirates 4 – On Stranger Tides, so don’t look too closely if you want to be surprised. Elsewhere in the restaurant is this great Easter Egg tribute to the former name of the location. A cask with the El Pirata Y El Perico logo on it up in the rafters. I’m assuming the below isn’t a tribute, but rather sloppy work on the part of Disney. How much time would it have taken for the sign shop to print up a new one of these? One hour? Two? There is no excuse for confusing signage like this. Also, note the broom placed right against the wall behind the sign. That should be off stage when not in the hands of a cast member.

Remember that great exterior. Here’s a closer look at the main sign for the restaurant. If you look close you’ll see that the part that reads ‘Tortuga Tavern’ is just paint on a cut piece of plastic or metal. The previous version of the sign featured raised letters carved out of wood. That is something you can still see at the restaurant just by walking under the new sign and looking up. Yep, the old sign with the old name is right there on the back of the sign. Again this is confusing to a guest who is looking for the name of the location they’re at. But worse, it’s a sign of Disney failing to execute on the details for which it is so justifiably famous for. Those same details drive guests to spend a bit more to visit Walt Disney World instead of their local amusement park. The details help guests feel like they’re surrounded by an alternate version of reality, where they can escape life in the office, and be part of a grand show. Whenever Disney breaks that wall, they risk a devaluation of their brand.

When it’s open, thousands of guests eat at this location each week. Even if 1-2% of those guests feel their overall vacation experience could have been found for cheaper somewhere else, Disney could lose 10s of thousands of dollars in future business. Is it really worth it to go cheap on making a new sign or two to put the perfect finishing touch on an otherwise great location? Could you not add Caribbean themed food to the menu?

I don’t believe I’m wrong in saying that a few years ago this just wouldn’t have happened. Go back even farther and if Walt Disney had seen this at Disneyland, heads would have rolled. Someone, somewhere in the chain of operations at Disney World made the decision that keeping the budget for remaking that location low was more important than good show. That person needs find the money to fix this sad situation soonest and then go back and take traditions again. I think they’ve forgotten the order of the four keys and their importance to future profit.

Postscript: As you can see from the update at the top of this story, I’ve been forced to eat my words. Let me tell you it’s one meal I’m happy to digest. I apologize for having a rant based off a data set that now appears to have been incomplete. Of course, that is the risk Disney takes when opening a location with incomplete changes. You never know when some jerk with a following on the internets will see the bad show and spout off about it. In fact, I’m a little confused why they bothered to change the old signs at all. It’s not like the old name wasn’t a pirate theme…