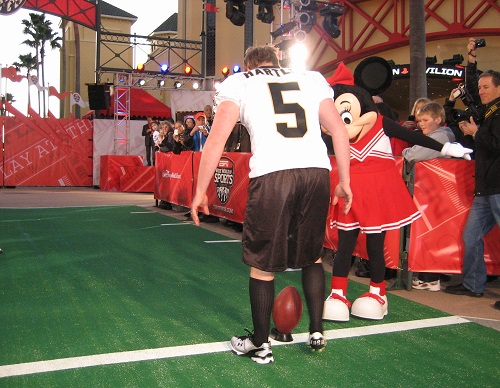 This week last year Walt Disney World rechristened the Disney Wide World of Sports Complex under the ESPN brand. Thus marked the zenith of a little project that began 8 years ago with the first ESPN The Weekend. For the first time, this year will feature some beloved college and professional sports mascots. Also, the ESPN the Weekend actually starts a day early on the 3rd with some live broadcasts by ESPN talking heads and Braves MLB Baseball Spring training.

The main even kicks off at Disney’s Hollywood Studios on Friday the 4th. Marquee stars from the NFL, MLB, NBA and NCAA, plus well-known ESPN on-air personalities, will be packing them in for the eighth annual Dick’s Sporting Goods presents ESPN The Weekend, providing fans have a one-of-a-kind opportunity see and hear many of their favorite athletes and ESPN personalities.

Mike Golic and Mike Greenberg, hosts of the popular “Mike & Mike in the Morning” show, return as co-hosts of the event, and will broadcast live March 3-4 from ESPN Wide World of Sports Complex at Disney. They will be joined by several fellow ESPN personalities such as “The Herd” host Colin Cowherd, “Monday Night Football’s” Ron Jaworski and MLB analyst Nomar Garciaparra.

The complete list of ESPN personalities and sports celebrities expected to attend is detailed at www.espntheweekend.com (Click on Who’s Coming).

In addition to athlete appearances, ESPN The Weekend will feature on-site telecasts of popular ESPN programs (beginning Thursday, March 3) at Disney’s Hollywood Studios and ESPN Wide World of Sports Complex at Disney, including “Baseball Tonight,” “First Take,” “Mike & Mike in the Morning,” “NFL Live” and “Friday Night Fights;” motorcades and Q&A sessions with athletes and ESPN personalities; Inside ESPN sports shows with commentators and athletes; and the ESPN Sports Zone interactive area where fans can interact with their favorite sports stars. There will also be Atlanta Braves spring training games taking place at ESPN Wide World of Sports, including a March 3 game against the Tigers that airs on ESPN with new “Sunday Night Baseball” crew Dan Shulman, Orel Hershiser and Valentine.

To find the latest updates on Twitter for ESPN The Weekend, go to @DisneySports and search #ESPNWKND.

ESPN will present live telecasts — including “Baseball Tonight,” “First Take” and “NFL Live” from a set in front of Mickey’s Sorcerer’s Hat on Hollywood Boulevard at Disney’s Hollywood Studios. Park guests will have a chance to appear on-air via crowd shots while watching the programming on video screens. Popular ESPN Radio shows “Mike & Mike in the Morning” and “The Herd” with Colin Cowherd will be broadcast live from the ESPN Wide World of Sports Complex March 3-4.

Additionally, live stage shows will bring fans and guests behind-the-scenes of some of the network’s most popular programs, including “Baseball Tonight,” “First Take,” “NFL Live” and “Stump the Schwab.” The shows will provide an inside look at favorite athletes, teams and ESPN programs. Fans can get into the action themselves by asking questions directly to ESPN personalities and athletes.

The ESPN Sports Zone will give guests of all ages the opportunity to test their skills at a wide variety of sports. MLB-, NBA-, NFL- and BASS-themed interactive areas within the Zone will have fans swinging for the fences, shooting baskets and throwing passes, as well as Dick’s Sporting Goods’ Sports Caravan, a multi-sport interactive area.

ESPN Radio’s “Mike & Mike in the Morning” will broadcast live from ESPN Wide World of Sports Complex Thursday and Friday, March 3-4 (6-10 a.m. ET). Co-hosts Mike Greenberg and Mike Golic will also host the “Ultimate Guy’s Weekend” during ESPN The Weekend, including activities such a round of golf, Friday Night Fights, a clambake and much more. ESPN Radio’s popular morning-drive show launched in January 2000 and today is heard (and seen on ESPN2) by more than 12 million listeners each week on more than 350 stations nationwide.

Four-time MLB world champion turned classical guitarist Bernie Williams, who closed out last year’s event with a live performance on “Baseball Tonight,” returns and will perform all three nights at the Sorcerer Hat Stage to close out the day’s activities. The former New York Yankee outfielder, who plays and composes his own music, has released two albums, The Journey Within and Moving Forward.

The Champion 5K at Dick’s Sporting Goods Presents ESPN The Weekend returns for its third year at Disney’s Hollywood Studios on Saturday, March 5, at 7 a.m., challenging runners along the course with ESPN and sports trivia and will feature athletes and ESPN personalities, including Jay Crawford, Dana Jacobson and Trey Wingo. The 5K will benefit The V Foundation for Cancer Research, and all participants will receive a T-shirt and finisher’s medal. There will also be a Fun Run for kids at 8 a.m. To register, visit runDisney.com.

Event activities are included in regular admission to Disney’s Hollywood Studios. The Walt Disney World innovative ticket pricing system, Magic Your Way, provides guests with the opportunity to customize their vacations and Florida residents can save on tickets all year long. Please note: separate tickets must be purchased for events at ESPN Wide World of Sports Complex.