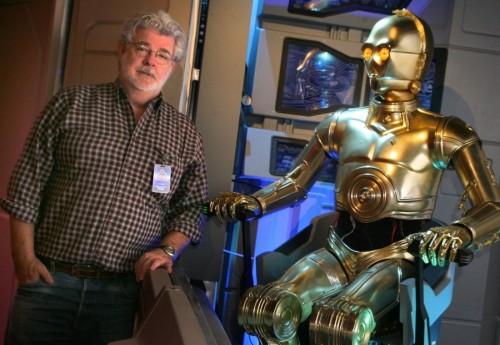 The updated version of the Star Tours attraction is nearing completion as evidenced by this visit from Star Wars creator George Lucas to Disneyland in Anaheim where the attraction is already undergoing test rides. Lucas was accompanied by producer Rick McCallum and both gave it a thumbs up.

Here George poses inside a remodeled motion simulator vehicle, the Starspeeder 1000. That’s C-3PO in the cockpit area. Looks like our nervous friend has moved from the screen to the captain’s chair. Should make for quite an adventure.

We’re still waiting for an official announcement for the 2011 Star Wars Weekend Dates. Although now that May 20th has been announced for the Star Tours 2.0 re-opening at Disney’s Hollywood Studios, it seems likely they’ll start that weekend with a big event.