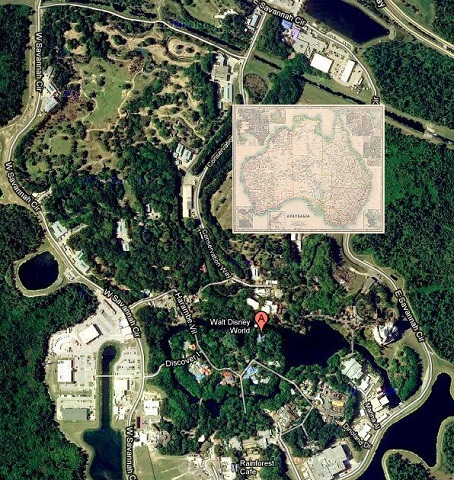 I first reported on the development of a new land at Disney’s Animal Kingdom based on the continent of Australia back in October of 2007. It was shortly after that when the housing bubble popped for good and the house of cards banks had built on home mortgages came tumbling down threatening to take the world’s economy with it. At that point Disney turtled and postponed a number of projects until a time when the economy returned to better.

That time appears to be now. Despite Iger’s protestations on quarterly results conference calls, all new spending on the theme parks is not exactly over. There’s a lot scheduled, just at Walt Disney World. Work will begin in earnest on the Art of Animation resort and a new DVC property is scheduled for the old River Country location. We also know about the expansion of Magic Kingdom’s Fantasyland. Phase I is well underway, and Phases II and III are undergoing retooling with discussion boards going crazy with rumors of what is in and what is out. Downtown Disney will soon have Hyperion Wharf. Star Tours 2.0 is coming to Disney’s Hollywood Studios, and there are two big plans for DHS expansion fighting over which will get the green light first. Imagination pavilion at EPCOT has long been rumored for another makeover. I hear they’ll start work as soon as they can find a replacement sponsor for Kodak. Even ESPN Wide World of Sports complex has a bowling alley waiting for a new sponsor to set the bulldozers to work. That leaves just one park, the park most in need of additional capacity, waiting to see what cards will be played.

That park is Disney’s Animal Kingdom. This week I heard a couple bits of news that has me ready to say “G’day Mate!” Yep, work on the rumored Australia section of the park has reportedly been approved. Although I have not yet seen it myself, my minions tell me that there has been some clearing work on the future site already. I also heard that approval has been given in the new budget to hire some additional resources that will be tasked to the project. Take those two facts, along with a couple other sources I spoke to, and I think we can safely say the land of Oz is coming to Orlando.

They way I see it, Australia is the first step in realizing the final vision of Disney’s Animal Kingdom. The park currently lacks any aquatic/sea-life exhibits. So picture a Great Barrier Reef exhibit and a Killer Whale and/or Dolphin show. DAK does have a few Kangaroo, but a larger Marsupial exhibit would be a great addition. The location of Australia will allow guests to walk to and from the Conservation Station and allows removal of the Wildlife Express railroad. That frees up important land in Africa which will finally allow The Festival of the Lion King to move to its rightful place in the park. Once that happens, Camp Minnie Mickey is open to be re-themed (although don’t get your hopes up for Beastly Kingdom, that ship has sailed).

I’ve highlighted a few areas here in this overhead shot: 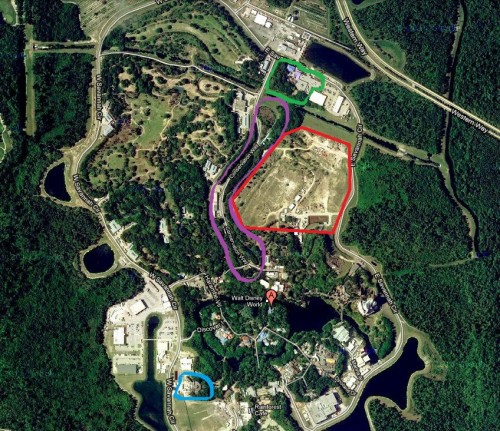 The red area is where Australia will be built. This is where the construction vehicles parked when they were building Everest. But the entrance is actually closer to the Asia walking trail. The purple area is where the Wildlife Express railroad currently runs to Rafiki’s Planet Watch (aka Conservation Station) highlighted in green. It’s a snug fit, but the whole Festival of The Lion King (in blue) can fit in the lower turnaround area for Wildlife Express. Once FoTLK moves, you can see the huge expansion pad below it in Camp Minnie Mickey just waiting for development.

This leaves one problem — transportation. Disney needs to realize that DAK is the largest of its theme parks and will be getting even bigger with Australia. The modified hub and spoke model will be dashed with the addition of Australia. What’s really needed is some sort of system that will bring guests from the front of the park to the back. While I’d love to see some sort of peoplemover, it goes against the theme of nature to have the transportation of tomorrow in the park. They could repurpose the Wildlife Express and run it from Conservation Station/Australia down to the back side of Dinoland. That would help tired feet get back to the front of the park at the end of the day. However, I think the perfect solution for this problem is a skyway. New technology I just saw at IAAPA gets rid of some of the problems Disney experienced with the old skyway and the park really is built to be experienced from above as well as on the ground.

My usual philosophy with Disney projects is to not believe anything is for real until the day after it opens to the public. But I feel the needs of the park and the clues from my sources are aligning to the point where I am relatively confident that Australia is on the way. Disney has to come up with an answer to Harry Potter, guests are leaving DAK after half a day or just skipping it entirely. Making DAK a full-day park needs to be a high priority for the resort if it wants to hold guests on property for four full days. Australia is the first step down that path. I report back as soon as I have more.