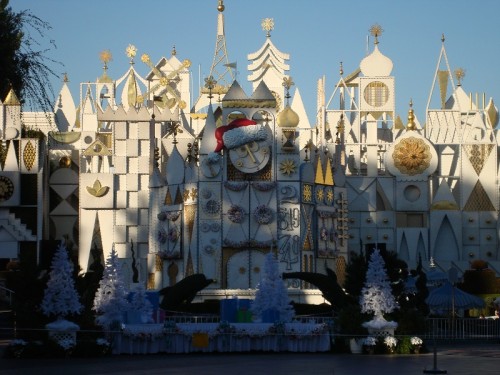 Friday marked the official start of this years holiday festivities at the Disneyland Resort. I was lucky enough to be able to witness one of Disneyland’s most iconic attractions be lit up during a special lighting ceremony. “It’s a Small World Holiday” has been lighting up the night since it’s premiere in 1997, but for one family it was even more magical. 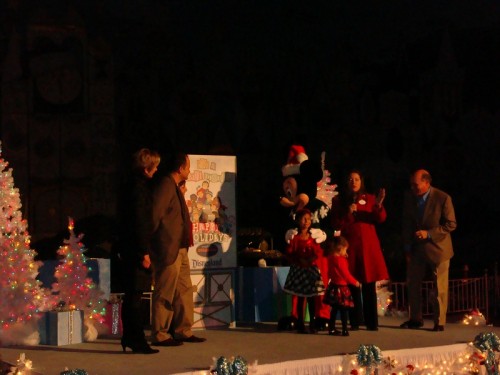 The event took place on a stage directly in front of the clock tower and was decorated with several white Christmas trees and lights to give it a festive holiday look. Disneyland Ambassador, Danielle DuBois kicked off the ceremony with a few words about the history of “It’s a Small World” and it’s move from the New York World’s Fair to it’s permanent residence in Disneyland. 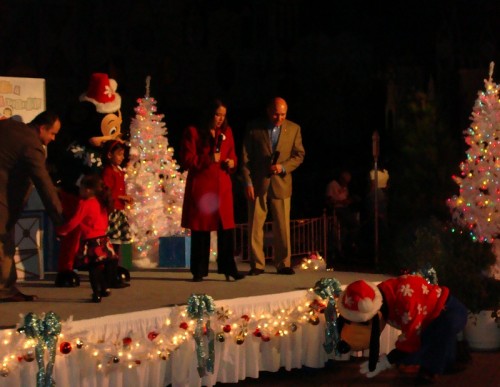 She also talked a bit about the holiday makeover done annually before bringing on-stage the Vice President of Marketing for Sylvania, Mike Colatti. He explained that Sylvania is the current sponsor for “It’s a Small World” and has done a huge part in bringing the exterior of the attraction to life in thousands of lights. He then proceeded to explain that in addition to lighting the attraction for the season, they helped one special family bring the same joy to their own home in Anaheim, California by doing a special holiday makeover complete with lights, props and decorations. 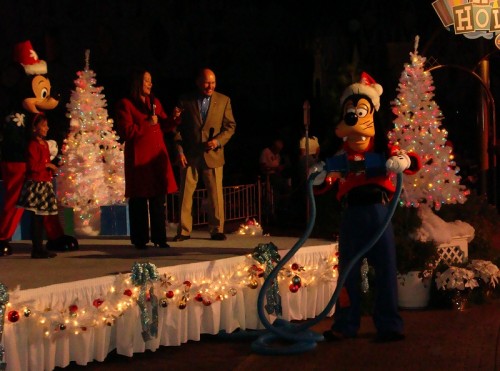 The next person introduced to the stage was the Vice President of Marketing for CHOC (Children’s Hospital of Orange County), Jan Lansing. She explained that CHOC specializes in the health and well-being of children in the area throughout the year. Also, that a patient of CHOC, Adela Jauregui and her family would take place in a once-in-a-lifetime opportunity. She would flip the switch to turn on the lights to the exterior of “It’s a Small World Holiday.”

The Jauregui family arrived to the stage in the Ambassador coach, escorted by Mickey Mouse. Danielle mentioned that before the switch could be flipped, they needed an expert technician to check the plugs and wiring to make sure everything would happen smoothly. “Expert technician” Goofy arrived to the stage, looking around aimlessly for a while until he found a large plug un-socketed underneath the stage. He plugged in the lights so the Jauregui’s could proceed with the event. 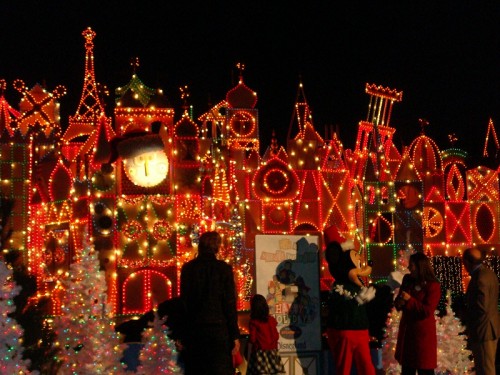 With a count to three, the huge switch was turned on and the “Small World” facade was transformed into thousands of beautiful lights. Overall, the event was very heart-warming and it was nice to see holiday cheer spread to a much deserving family.