Bringing the Disney Magic Back to the Big Apple

Editor: Please welcome guest author Jennifer Lazzaro to The Disney Blog. The events of the grand opening were this morning, I apologize for not posting it until now. All my fault, not Jenn’s.

One more day before the official grand opening of the brand new Disney Store in Times Square! While the store has been in soft opening for a few days now, the grand celebration is happening Tuesday morning, November 9th, with a parade down Broadway, a performance by Jordin Sparks, and many other magical happenings. I was lucky enough to attend the press event a day prior which included a private tour given by none other than the President of Disney Stores Worldwide, Jim Fielding. After checking in, guests of the event were allowed to wander the first floor of the store and have a look around. The first thing to catch your eye is the beautiful New York theme right as you walk in. Huge cutouts of some of the popular NYC skyscrapers greet guests and direct them towards the exclusive Disney NYC merchandise. The enormous Disney character murals on the walls help transport you away from the hustle and bustle of the city life you left outside on Broadway. In addition to the exclusive NYC merchandise, the first floor consists of a mix of the ever popular Vinylmations, Disney Broadway items, adult clothing, holiday items, edible sweets, and a long wall of plush characters. 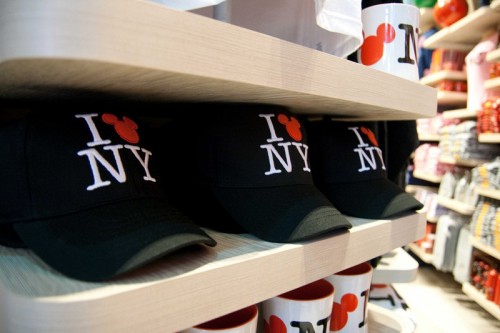 We were then led upstairs where we were introduced to Jim Fielding and the tour immediately began. Jim’s excitement for the flagship store was instantly contagious. Getting some of the nitty gritty details out of the way, he went over what many of us Disney hardcore fans already know… this is the 12th new concept store opening in the country, and is by far the largest. Ever since the Disney Stores were bought back in 2008, they have been wanting to bring the magic and pixie dust back to New York. In regards to merchandise, there are over 18,000 products throughout the store. At least 80% of the merchandise for sale on the main floor is exclusive to the NYC store and 95% of the overall merchandise throughout the store is only available at Disney Stores and DisneyStore.com. The Times Square location is expecting to have over 11,000 guests daily visit and shop. Now that’s a lot of people, even for New York! Like most other Disney endeavors, it was clear that a great deal of thought and detail was put into every aspect of the store. The upstairs floor is completely geared towards children and, as Jim put it, they wanted to figure out “how to be the best 30 minutes of a child’s day.” Every nook and cranny of the upstairs area of the store is designed with a child in mind, where their imaginations can run wild and they can be transported into whichever Disney adventure they wish. From the first step off the escalators, guests are at the beginning of the Pixie Dust Trail, a winding, glittering path paved into the store floor. The Trail is a way of organizing and guiding guests through each ‘neighborhood’ (or franchise) and each area will have it’s own storytelling experience. The first neighborhoods guests encounter will always be the current or future releases, today the areas were themed for the upcoming Tangled movie as well as the just released Toy Story 3. 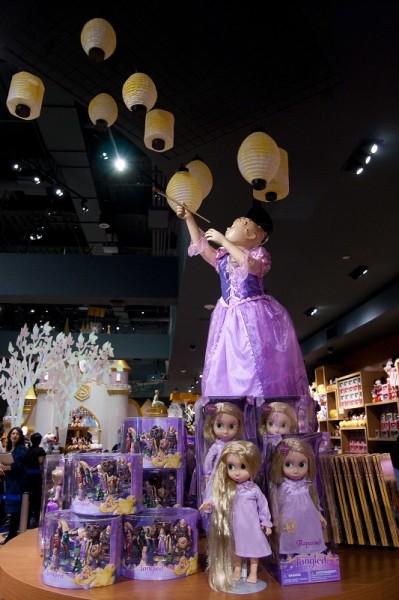 As we started down the Trail, Jim pointed out the small area dedicated to the upcoming release, Tron. As opening day of the movie gets closer and excitement builds, the merchandise area will grow. It was pretty obvious that we had stumbled upon the neighborhoods geared towards boys as the Marvel neighborhood, which is currently the only one in any Disney Store, was next on the journey. In the Ridemakerz area, we were told that this was the only Ridemakerz where guests can build cars from the actual Cars movie such as Sally, Lightning McQueen, and Mater.

While in the center of the top floor, we paused to take in our surroundings. 13 foot lucite trees were scattered throughout the floor and had animated content projected onto the branches. The animation and music changes throughout the day to keep the store “fresh and moving” and to give the feel that the store is alive. Looking up at what used to be the 4th floor of the property, the beautiful New York City skyline greeted us, mixed in with some subtle Disney storytelling, of course. Is that Cinderella’s horse drawn carriage crossing over the Central Park Bridge and…Flubber? Fabulous! 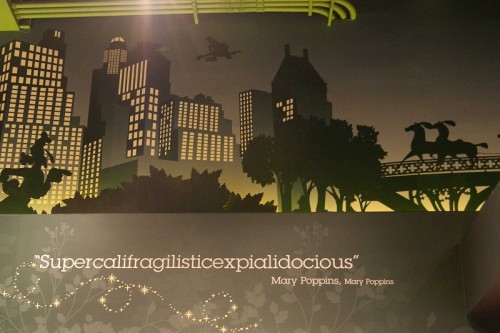 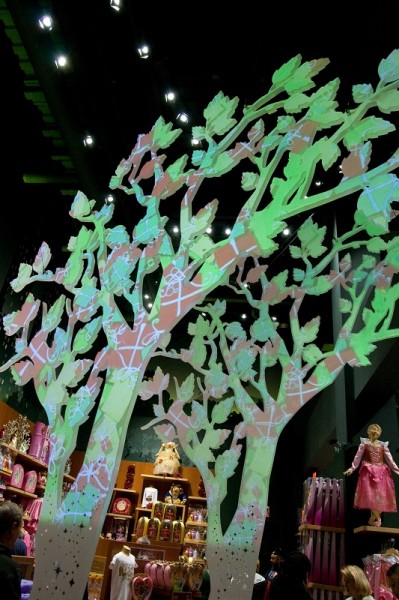 One of the biggest draws and where I saw a lot of excitement was inside the 20 foot tall Princess Castle, home to all of our favorite Disney Princesses. The castle boasts not one, but two of the now famous interactive magic mirrors. Guests can activate a magical storytelling moment when they wave the wand or crown of their favorite princess in front of the mirror. The mirror comes to life and a 20-30 second scene is played. Each princess has 8 stories each so it is a different experience each time. While Jim was explaining the technology, a little girl and her mother, almost as if on que, walked up and started playing with the mirrors. The look of utter awe and amazement on both their faces was priceless and just reiterated that the Disney magic has no age limit. 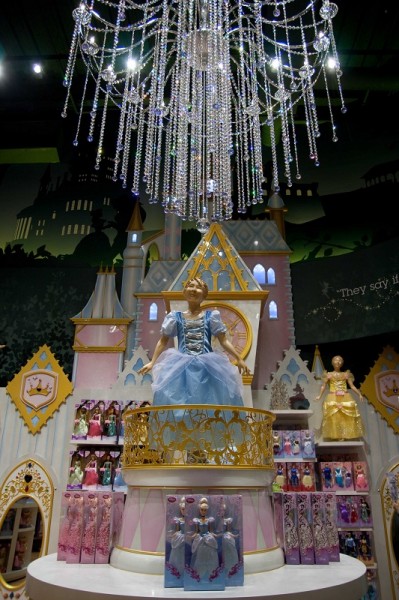 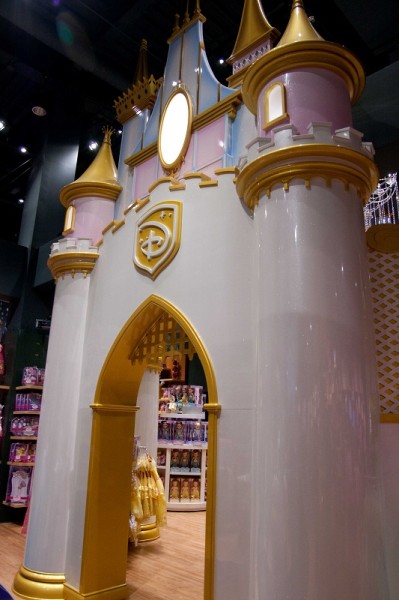 The final stop on our tour was another iconic feature of the store, Storytelling Theatre/Imagination Station. Home to the daily opening ceremony, it is a large gazebo that houses a custom 12 foot screen playing guest selected Disney content, as well as a family activity center where little ones can color and interact. A touchscreen, or what adults would call a “video jukebox”, lists possible clips available that day. According to Jim, so far the most popular have been any of the Phineas and Ferb clips, all of the Disney Channel clips, and the Tron trailer. At the conclusion of the tour, I was able to get a few minutes of individual Q&A time with Jim. He mentioned that current plans for expansion call for the renovation or creation of 35-40 additional stores. He’s extremely glad to have the stores “back in the family” and that the whole endeavor is all about “creating family moments.” Like I mentioned earlier, it’s clear that Jim genuinely loves his job and his excitement is contagious!

Overall, the Disney Store team did an amazing job putting the Times Square flagship location together! The storytelling throughout the entire store is magical and whimsical and just what New York City needs to transport guests away from the hectic life in the Big Apple. Next time you’re in New York, definitely make it a point to wander through the store and try finding all of those hidden Disney details! 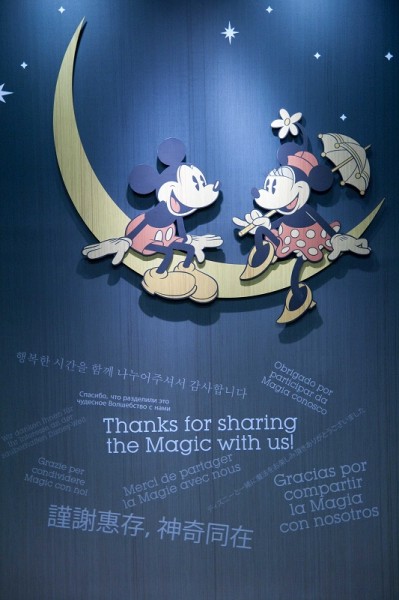 When Jenn’s not interviewing Disney Executives, you can find her at Eat Sleep Disney.