Disney VoluntEARS and Audubon of Florida Flock Together for Osprey Recovery 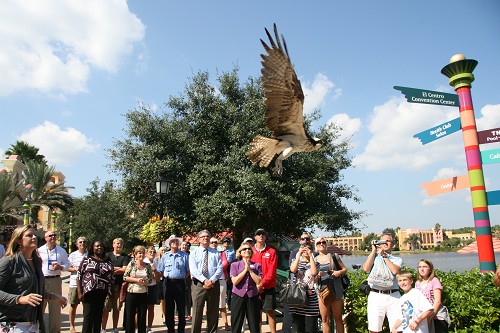 Disney sponsored facilities and Disney Animal Care experts play a role in the recovery of many animals around the world. But this time the animal needing help was right in Disney’s back yard. After a four-month rehabilitation at the Audubon Center for Birds of Prey, an adult male osprey was recently released at Disney’s Coronado Springs Resort near the site where he was rescued earlier this summer.

An eager group of Walt Disney World Cast Members and resort guests looked on as the bird took to the air for the first time since June.

The osprey was emaciated and listless when he was found on June 17. After receiving emergency care from Disney animal care experts, the raptor was transported to the Audubon Center for Birds of Prey in Maitland, Fla. for further treatment. After several months of intensive care, the bird was moved to the Center’s Magic of Flight barn to stretch his wings and complete the rehabilitation process.

Disney sponsored the building of the flight barn in 2001 and has provided ongoing support of the Center. As one of the few structures of its kind in the U.S., the flight barn is used to rehabilitate raptors, such as eagles, hawks, owls and ospreys, so they can ultimately be released back into the wild.

“It’s always nice seeing a bird released back where he belongs,” said EagleWatch Coordinator Lynda White, minutes after watching her most recent patient fly the coop at Lake Dorado. She attributed the successful release to the support of her staff and companies like Walt Disney World. “We wouldn’t be able to do what we do without Walt Disney World,” she said. “In fact, without Disney, there wouldn’t be an EagleWatch program or a flight barn at all.”

Several weeks prior to the osprey’s release, volunteers from Walt Disney World Resort joined staff at the Audubon Center for Birds of Prey to refurbish the flight barn and its surroundings. Volunteers spent the day helping with roof repair, pressure cleaning, replacement of food boards and prey boxes, and re-wrapping very large perches.

“We were excited to pitch in to help spruce up the Audubon Center for Birds of Prey, which provides so many services to both community and wildlife,” said Nancy Gidusko, director of Community Relations at Walt Disney World. In addition, Walt Disney World Community Relations gave the center a new pressure washer and sliding ladder for continued upkeep, and Disney’s Animal Programs and Environmental Initiatives donated equipment for animal care.

Disney’s on-going support has enabled the flight barn to play a pivotal role in conserving and protecting Central Florida’s wildlife by helping thousands of birds regain their strength and stamina before returning to the wild.