Friends of ours were visiting Sarasota, FL this week and the Frost family took off a few days to head down to the beach and help entertain them. The beaches of Longboat Key, Lido Key, and Siesta Key (all adjacent to Sarasota) are some of my favorite places to chill. We looked forward to a summer visit instead of our usual February sojourns.

The other thing we looked forward to was exploring a few of the areas attractions. Sarasota is about a 2 hour drive from the Walt Disney World resort, which meant I could count it as research. Another bonus.

As usual when I travel, I keep my eyes open for ties to the Walt Disney company. There may be dozens in Sarasota, given its proximity to central Florida. But I didn’t stumble across any until 5pm on the last day.

We spent that afternoon at The John and Mable Ringling Museum of Art. The two (soon to be three) buildings of Circus history kept the 7 year old’s attention and he also enjoyed touring the Ca d’Zan (House of John), the Ringling mansion. That left us about an hour to stroll through the 38 galleries of the Art Museum. Not nearly enough time to take it all in, but I made a point to visit the Special Exhibits that may not be around the next time I’m in town.

I’m glad I did because the HEYDAY: Photographs of Frederick W. Glasier exhibit focused on early 1900s Circus performers. A circus fan in my heart and having recently read “Water for Elephants“, a book about that era of Circus life that’s being made into a movie starring Robert Pattinson, I enjoyed the few Glasier photos in the book. There were over 50 in this exhibit.

The very last photo in the exhibit featured a young female circus performer known for her equestrian feats and for her ‘slide of death’ – one Tiny Kline. I snapped a photo of the picture (don’t tell anyone) and later bought a copy of it in the gift shop (see, it’s all good). 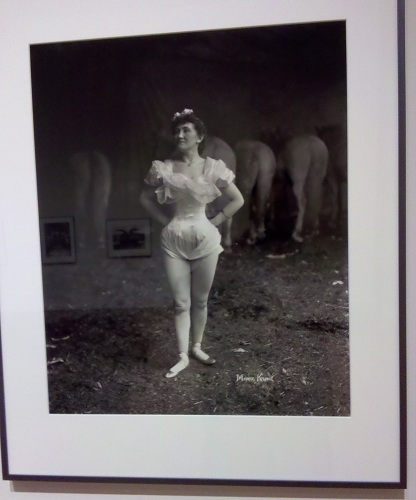 Kline was born in Hungary as Helen Deutsch, she changed her name after coming to America at the age of 14 and choosing to join a vaudeville act instead of work as a seamstress. She met her husband who had an equestrian circus act and eventually took over that act after he died performing a trick. The above picture was taken in 1918 when she was 27 or 28.

Later Kline developed an aerial “iron jaw’ act she called the “slide of death.” She performed this many times over her life including this slide across Times Square, when she was 42, that was captured on film.

Now, Disney fans will look at that video and think, “gee that reminds me of something.” If you think it looks like Tinker Bell flying down from The Matterhorn or Castle during the fireworks, you’d be right. Walt’s team somehow found Tiny Kline, who had moved to southern California to find a career in Hollywood (after having already retired to live in Sarasota, FL). They recruited her to slide down the Hollywood Bowl dressed as Tinker Bell and in a harness as part of a concert Walt had organized in 1958 called ‘Disneyland sponsors Disney Night at the Hollywood Bowl’.

Three years later in 1961, when Disneyland added Tinker Bell to its nightly fireworks show, they turned to Tiny Kline, aged 71, to repeat her performance. Kline agreed and continued to perform as Tinker Bell, taking the bus to Disneyland each day, for the next three years, until the cancer that eventually took her life became too difficult to perform with.

Tiny Kline was one of those people who lived the story of America. An immigrant, entertainer, bon vivant, and eventually an icon. Kline wrote a memoir, which was edited and published a few years ago. You can read the editor’s introduction to that book over at Google, or buy it on Amazon. I also highly recommend the book of Circus photographs by Glasier.

For me, finding Tiny Kline there at the end of this trip to Sarasota was a great moment. I left feeling recharged about Disney and how it reaches across time, politics, and gender to impact our lives. It made me aware that my part of the story, no matter how small, is playing a part in the same story that Tiny Kline told. I will be sure to always respect that.