Please welcome guest author Daniel Wanderman and photographer Liz Degen. All photos are from Liz unless otherwise noted. A big thanks to them both.

As a Disney aficionado and frequent visitor to the parks, I jumped at the chance to experience the grand opening of the freshly redesigned Disney Store at my local mall.

Over 80 years ago, Roosevelt Field was the site of an airfield where Charles Lindbergh took off in the Spirit of St. Louis for his historic transatlantic flight to Paris. Today, the area is home to the eighth largest shopping mall in the country and the first Disney Store on the East Coast to undergo this magical makeover.

Our day started with a tour of the store led by Molly Adams, Vice President and General Manager of Disney Store North America. She showed us around the 4,500 square foot facility and reminded us that it’s “not just another place to buy Disney products; it’s really about being immersed in the Disney experience and feeling the magic.” This became apparent as she led us down a trail of pixie dust, one of the signature icons of the new stores. 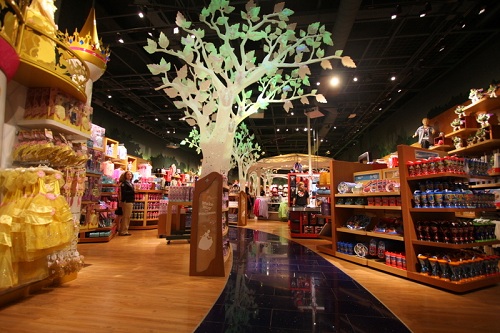 We passed by magical ‘trees’ which seemed to be alive with projections of characters and whimsy. Lining the walls: an elegantly silhouetted skyline of famous Disney icons and characters. If you’re lucky, you may even see Tinker Bell or other surprise guests float by! 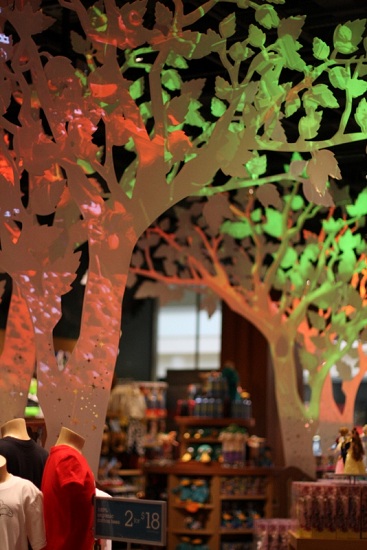 We made our way through a Disney Princess Castle, one of several magical ‘neighborhoods’ within the store. Pick a magic wand from the shelf and simply wave it before a magic mirror to bring your favorite Disney princess to life. Molly explained that the “goal is to bring the magic to guests and give them a magical Disney experience outside of the parks [since] a fully immersive experience is unique and not often replicated in retail.”

Nearby is a Disney·Pixar CARS-branded RIDEMAKERZ station, an extension of the popular stores located in both Disneyland and Walt Disney World’s Downtown Disney districts. Here you can design and build custom, radio-controlled cars with a Disney twist. (Think Build-A-Bear meets “Pimp My Ride.”) As we move deeper into the store, the infant and toddler section is apparent with a plush ‘fountain’ centerpiece featuring a variety of your favorite cute and cuddly characters waiting to be taken home. 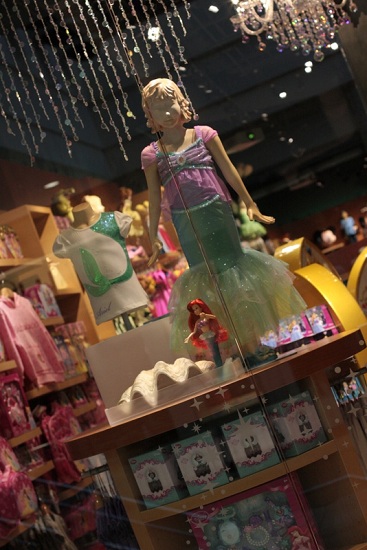 A gazebo-esque structure looms close by, which houses a 12-feet-wide video screen. A panel next to the screen allows guests to choose from among a library of snippets from Disney movies, TV shows, and their favorite music videos to watch on the big screen. This ‘theater’ is also used for special events, storytelling experiences, birthday celebrations, craft time, and is the base camp for the ‘imagination explosion,’ an interactive feature in which the entire store is taken over by Disney villains – it is up to you to use your imagination to defeat them and restore things back to normal… very Fantasmic-ish! 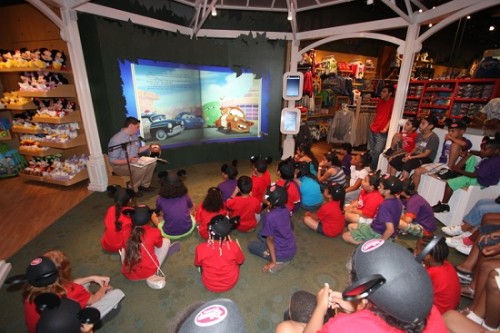 Although the influence of Apple (iPads are mounted throughout the store with custom ‘Magic Key’ software and each Cast Member carries an iPod Touch in order to control lighting, audio, and guest experiences) and Imagineering is apparent, Molly explained that Disney did not collaborate with these entities (contrary to popular belief), but instead worked with a specialty retail design firm in order to create these customized experiences.

The Variety Boys and Girls Club of Queens were on hand today to take part in the magical ‘unlock the imagination’ ceremony. Each child donned Mickey ears and jumped with glee at the sight of Buzz Lightyear, who made a special appearance for the grand opening ceremonies. A countdown clock built anticipation as one of the lucky kids turned a giant key to open the store. We were told that each morning, the store would open and close with a similar ceremony. Disney Parks fans know this as the ‘rope drop’ and the ‘kiss goodnight.’ Following the opening, the kids from the Boys and Girls Club were treated to a special storytelling session: a reading of a Disney Digital Book on the big screen. The Cast Member conducting the reading was able to ‘turn’ pages using his iPod Touch – very cool!

Although a lot of the store was dedicated to entertaining kids and displaying children’s products, it still held my interest. The displays and distractions kept me busy and the kinetic atmosphere really shined once the store was filled with curious visitors. Even just watching people walk through the entrance and smile in awe at the grandeur of the re-design was enough to make me happy. As Molly described it, “Disney is all about family and bringing something special into peoples lives.”

My overall impression of the new, high-tech, interactive store was very positive. There was some more variety in the adult-sized clothing selection and the new print designs really caught my eye. Vinylmation collectors will not be disappointed by the addition of this popular item to the stores.

My only criticism is that I wish there was more theme park merchandise or theme park related cross promotion within the store. Kids (who am I kidding? I’m talking about myself here) are always looking forward to their next big trip to Walt Disney World or Disneyland, and a visit to your local mall’s Disney Store is really the closest thing you’ll get to the real thing. Yes, the store will be enough excitement to tide you over for a few days or so, but there’s always room for more.

I used to drag my friends into the old Disney Store each time we visited the mall. This was both painful and annoying for them since they didn’t quite understand my obsession. Now, I have some leverage behind me with all of the interactive kiosks and displays as well as the surprises along the way.