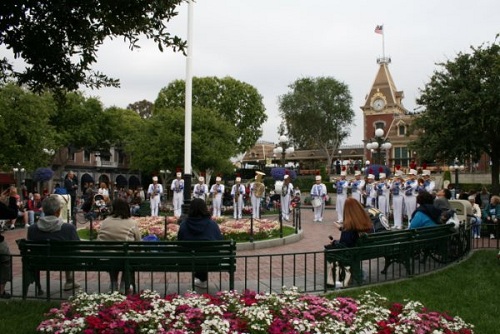 Flag Retreat is a moving patriotic moment every day at Disneyland.

Walt Disney once said that if you look in his eyes you’ll see American Flags waving in both. To me Independence Day has always been a very Disney Holiday. When possible we were at Disneyland for that magical night, and not, the patriotic finale of the fireworks served as its own reminder.

So no matter where you are tonight I wish you a very safe and celebratory Independence Day. Let the bells of Liberty ring across the land. Here’s a little bit of trivia concerning that flag-pole base. When they were building Disneyland they had to stretch every dollar. So this flag-pole base was purchased at scrap metal prices. It had been a lightpole on Wilshire Blvd in Los Angeles until a car crash knocked it over.