This summer from From June 6 through Aug. 14, “Summer Nightastic!” lights up the night at the Walt Disney World Resort. The big headline is the return of the Main Street Electrical Parade, which I previewed here, but there’s a lot more to the summer than electro-synthe-magnetic musical sounds.

The “Sounds Like Summer” returns to EPCOT featuring tribute-band concerts rock guests each evening from June 12 to July 31 with familiar tunes ranging from “Hotel California” to “Stayin’ Alive.” Each of these bands has been approved by the original band they’re paying tribute to, so you know you’re getting the music that sounds the most like the original. 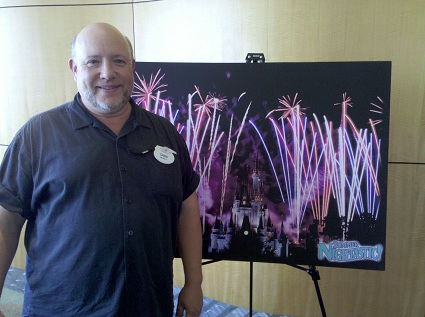 When it comes to the night, the “Summer Nightastic! Fireworks Spectacular” at the Magic Kingdom presents more after-dark magic when the sky explodes with vivid color and visual effects that tell a thrilling story headlined by fairies and pirates. I like how they’re kicking it old school with the fireworks show name.

In addition to the new overlay coming to Twilight Zone Tower of Terror, Disney’s Hollywood Studios will add the Rock ‘n Glow Dance Party to its Summer Nightastic! lineup. Guests are invited to trip the light fantastic at a rockin’ dance party every Tuesday and Thursday through Sunday. A DJ and a special engagement rock band play sizzling summer sounds beginning three hours before park closing on Hollywood Boulevard. Watch for popular Disney characters to step into the dance party spotlight.

In the video below Chris Oyen, Show Director, Walt Disney Entertainment, walks us through both the Summer Nightastic! Fireworks Spectacular and the Rock ‘n Glow Dance Party. (You might have to crank the volume a bit, they weren’t using microphones.)