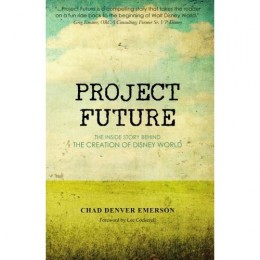 Many a great book has been written about Walt Disney, the man, and the projects he set his company to create. But for some reason, no one had as yet mined the very interesting story of the business, legal, and political machinations that were required to build Walt Disney World. That wait is now over.

Who better to dig into the past of a theme park that owes its existence to a special law than a theme park law specialist. Chad Emerson is just that person. “Project Future: The Inside Story Behind The Creation of Walt Disney World” assembles what we think we already knew about the creation and fills in the gaps with new details culled from original interviews and insightful research.

The book lays out the search for a location for Walt’s next big project after Disneyland, the secrecy involved in acquiring the land in Central Florida once decision was made to build there, and the unique political situation that was required to make Walt Disney World a reality. These details make the backstory of Walt Disney World so much richer, which is why you’ll want to add it to your collection.

Emerson is a law professor by trade and his writing reflects that. Every argument is laid out in easy to follow stories with plenty of supporting materials. While his style could not exactly be considered ‘warm’, it isn’t cold or sterile either. Professorial is a closer description. What makes the book really work is his talent for drawing connections.

I asked Emerson to answer a few questions about the book and his experience writing it:

The Disney Blog: What was your inspiration for writing ‘Project Future’?

Chad Emerson: I was conducting some research on improvement districts as part of my law professor job here at Faulkner University. While doing that, I stumbled upon the Reedy Creek Improvement District–the quasi government district created especially for Project Future. It didn’t take long to realize that there were many interesting stories that resulted in Disney World becoming a reality. Several great books had discussed the topic as part of a chapter or two but I wasn’t able to find any that focused exclusively on the creation of Disney World. I decided to take a stab at sharing these fascinating events from 1959 to 1971.

TDB: What was the most surprising thing you learned while researching the book?

CE: How close Disney World came to not existing–or at least not existing in Central Florida where it is now. In 1959, Walt had struck a handshake deal to build a Community of Tomorrow in Palm Beach, Florida. The deal fell through for business reasons but it was very close to becoming a reality. Had it done so, there’s a real chance that Walt’s Florida Project would have ended up in the Palm Beach area.

TDB: Who was your favorite interview subject and why?

CE: I really enjoyed visiting with many people including Governor Claude Kirk, Harrison “Buzz” Price and others. However, it was the first person that I interviewed, an attorney named Tom DeWolf, that ended up being my favorite. Mr. DeWolf was involved in the early land identification and acquisition issues for Project Future. He later went on to serve as Chairman of the Reedy Creek Board of Supervisors.

Ray Maxwell helped me get in touch with Mr. DeWolf and, after visiting by phone, he invited me to his home to discuss the events. We ended up sitting around his kitchen table having a fascinating discussion of what he witnessed back in those days. It was after that conversation that I realized there was truly enough here for an entire book.

When reading your chapter on the creation of the Reedy Creek Improvement District, I was reminded of the recent Kelo decision at the Surpreme Court and how it delineates local governments rights to handle property how ever they want, even if it’s just for a business good. Do you think we’re able to draw a line from RCID to Kelo?

In my full-time job, I teach Property law and Land Planning and Development at the law school. Kelo always ends up being a very popular case to go over. While there are certainly some similarities, I think the biggest difference is that Kelo involved eminent domain–that is, the government actually taking someone’s property for another use–while most of Disney’s land acquisition involved private purchases of land. That said, the Florida legislature did provide the Reedy Creek entities with some eminent domain power in the original legislation.

TDB: Do you have plans for more Disney books in the future?

CE: Yes, I’ll be in Central Florida from June 13 to July 3 doing a series of Project Future book signings and book talks all over the area. At the same time, I’ll be researching my next book that focuses on how the development of SeaWorld, Universal, and Disney World in the late 1970s through the 1990s turned Orlando into, arguably, the theme park capital of the world.

TDB: Personally, it seems like the book on the creation of ‘EPCOT’ and how it evolved from Walt’s original plans has yet to be written. Any thoughts on that?

CE: I think that’s another great story waiting to be told in detail. Others have written about it but I’m not aware of any book whose focused solely on that amazing topic.

I recommend you pick up your copy of Project Future from LaughingPlace.com’s store. Right now it’s on sale for 15% off. Your purchase will support a great online Disney fan resource.