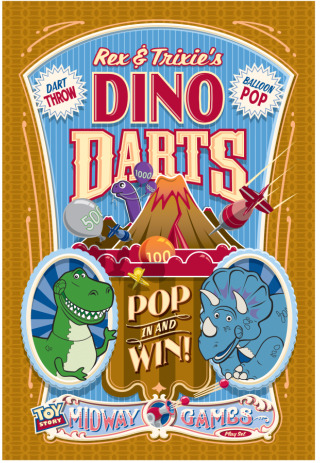 Arriving guests are welcomed by Mr. Potato Head, more than five feet tall and looking like he stepped right down from the movie screen. The state-of-the-art Audio-Animatronics Mr. Potato Head makes a perfect carnival barker, capable of engaging guests in two-way conversation and encouraging them to “step right up” for the immersive Toy Story Midway Mania! experience.

Everyone gets a front row seat when guests put on their 3-D glasses, “shrink” to the size of a toy and board Toy Story Midway Mania! carnival tram ride vehicles which add a huge amount of fun to the interactive experience. The exciting and colorful route takes guests through “Andy’s Bedroom” filled with oversized murals and toys. The vehicles angle to face Toy Story Mania! game booths – high-tech yet rooted in classic midway games of skill – and guests aim for 3-D animated targets using their own on-board spring-action shooters. Players pair up and sit side-by-side for a friendly competition that delivers an ever-changing variety of targets and surprises.

As they play, guests can actually see the “virtual” objects they’ve launched leave their spring-action shooters and hit (or miss) the targets. And thanks to 4-D special-effects technology, they may sense objects whirring past them as they pop out of the 3-D scenes.

The Toy Story Midway Mania! games – five of them, plus an introductory practice round – are designed to be enjoyed by audiences of all ages and skills, from beginners to experienced gamers. Play is energized by the spirit of the “Toy Story” characters cast in games that best suit their very animated personalities.

No matter how many times guests return to ride and play, they can be sure every ride-through will seem different.

Pixar Animation Studies is creating animation of the new characters plus animation for “Rex and Trixie’s Dino Darts.” New music – a dino-themed version of Randy Newman’s “You’ve Got a Friend in Me” – comes from veteran music editor and Newman collaborator Bruno Coon, who did the original music for the attraction.

Toy Story Midway Mania! was the first time that Walt Disney Imagineering created an attraction for two Disney parks simultaneously. The attraction opened in California and Florida in 2008.

Disney Parks guests not only get to play with “Toy Story 3” characters in Toy Story Mania! starting in late May – they get to see another new character from the film.

Starting May 9, Lots-o’-Huggin’ Bear will join his “Toy Story” pals in the delightful “Pixar Play Parade” at Disney’s California Adventure and “Block Party Bash” at Disney’s Hollywood Studios. In addition, Disney’s Hollywood Studios guests can pose for photos with Lots-o’-Huggin’ Bear in the meet-and-greet area inside The Magic of Disney Animation. Over at Disney’s California Adventure, guests can pose alongside the “Toy Story” gang inside a life-sized “blister pack” as if they themselves are toys.

“Toy Story 3” welcomes Woody (voice of Tom Hanks), Buzz (voice of Tim Allen) and the whole gang back to the big screen as Andy prepares to depart for college and his loyal toys find themselves in… daycare! These untamed tots with their sticky little fingers do not play nice, so it’s all for one and one for all as plans for the great escape get underway. A few new faces – some plastic, some plush – join the fun. “Toy Story 3” disney.go.com/toystory/ is a comical new adventure in Disney Digital 3-D. Disney•Pixar’s “Toy Story 3” debuts nationwide on June 18, 2010.