If you’re a Disney theme park fan born after a certain date, there are certain things at the park that for you were always just there, even though in reality they were later additions to the park. When you realize that you’re like, oh wow. The Swiss Family Treehouse was that attraction for me.

The Giant Disneydendron was added to the park in 1962 as a buffer between the jungles of Adventureland and the buildings of New Orleans Square that were on the way. The clever use of the popular Swiss Family Robinson theme was a people pleaser and a crowd eater for many years. Somewhere along the line that changed and the attraction was rethemed into the Tarzan Treehouse. The Robinsons still have their island treehouse out east if you want to pay them a visit (although, I’ll admit the decor lacks something compared to the original Disneyland tree). 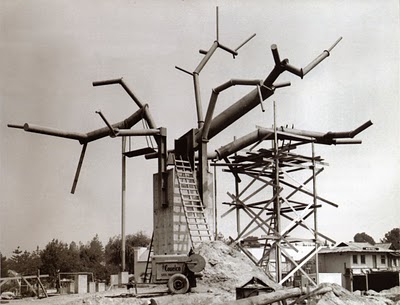 Kevin Kidney, an amazing artist of whom I wish I possessed just one thumb full of his talent, has posted three very rarely seen photos of the Swiss Family Robinson tree under construction at Disneyland in 1962.