I feel like I’ve written that headline before. It’s getting to be a broken record.

Today more than just a record was broken, but the whole front end of a Disney bus was crashed when it ran into the back of a parked non-Disney tour bus (reportedly a shuttle bus from the newly opened Hilton Bonnet Creek Resort and Waldorf Astoria). Also broken were 7 guests, including a 5 year old passenger, and 1 cast member, the 41 year old driver who was air-lifted to the hospital and rushed to surgery. He and his family and are in the thoughts of everyone at The Disney Blog.

Some good coverage of the accident from CF News 13 and the Orlando Sentinel. But no word yet on what caused the accident.  Busses are not usually stopped at that location, but the speed limit there is 25 MPH and there is plenty of visual clearance approaching the area even if the bus is going a bit over the speed limit. 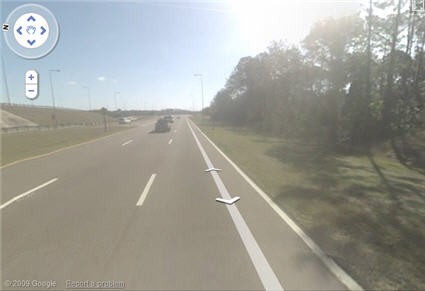 The above view from is from Google Street View. The non-Disney tour bus was stopped in the right lane approximately to the right of the yellow vehicle in the center lane. It’s a pretty straight shot for a good hundred yards in either direction. And with the fire control brush clearing, that forest on the right is thinner today than what you see above. Still you can see how unusual it would be to have a bus stopped there.

The accident occurred at 2:20pm on a Tuesday. Not exactly a peak time for travel. However, Disney is aware that the roads are getting too congested. They have a panel that’s looking at solutions for the property that will enable future growth without increased risk for accidents.  We definitely need to keep an eye on this.

Meanwhile, I hope everyone injured recovers swiftly and that this accident isn’t indicative of a trend of poor safety on Disney’s transportation system.