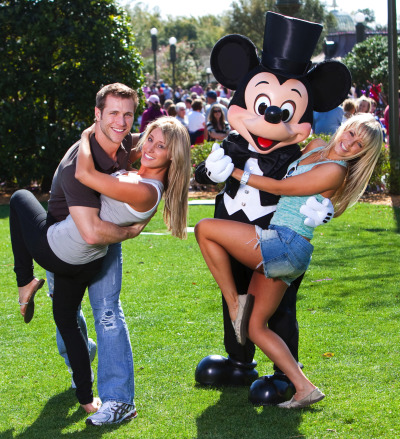 Jake Pavelka (left), star of ABC’s “The Bachelor,” strikes a dance pose March 13, 2010 with his fiancee, Vienna Girardi (second from left) while Mickey Mouse poses with professional dancer Chelsie Hightower (right), star of ABC’s “Dancing with the Stars,” at the Magic Kingdom in Lake Buena Vista, Fla. Pavelka and Hightower are partners on the new season of “Dancing with the Stars” which premieres March 22, 2010. Pavelka, Girardi and Hightower were vacationing this weekend at Walt Disney World Resort. (Photo courtesy Disney. Matt Stroshane, photographer)