The presence of the Walt Disney Company in central Florida has brought many good things to the community. But next year one of the best will open. It’s a pediatric care center at the Florida Hospital that will feature 200 beds and a staff of 500. Disney World has committed more than $10 million and the creative minds of its imagineers to help build a new pavilion to house it in. In return the Florida Hospital will name it the Walt Disney Pavilion. With help from a world-famous mouse, dozens of eager children and a shower of confetti, officials opened the doors to the welcoming, new lobby of the Walt Disney Pavilion at Florida Hospital for Children and unveiled the first physical milestone of the hospital’s innovative model of pediatric health. The entrance serves as a gateway to the remainder of the children’s hospital where the smallest patients from around the world will receive superior treatment and care from renowned physicians.

Inspired by the soothing environment of nature, the lobby features beloved and nurturing Disney characters such as Timon and Pumbaa from “The Lion King,” Flounder and Sebastian from “The Little Mermaid” and Rutt and Tuke from “Brother Bear.” Walt Disney Imagineers designed the space with these thoughtfully chosen characters to complement the hospital’s healing environment where young patients are supported by caring, medical professionals, along with family and friends. 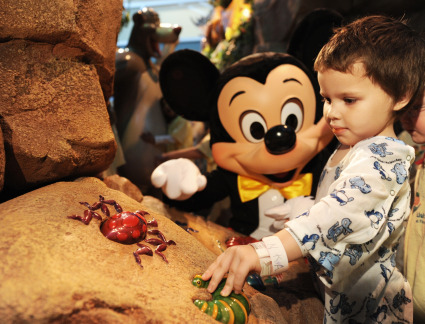 “Our goal is to create a therapeutic environment that reflects the type of attention and care children and their families receive during their visit,” said Marla Silliman, administrator of Florida Hospital for Children. “With this captivating entrance, we hope young patients overcome the apprehension of a hospital stay by engaging them in a world of fantasy, imagination and adventure.”

“I didn’t feel like I was in a hospital,” said Kyle Bennett, a 6-year-old boy from Orlando. “’The Little Mermaid’ section of the lobby was my favorite part and I loved scaring the salmon away.”

The lobby of the Walt Disney Pavilion at Florida Hospital for Children features several interactive activities and experiences that children of all ages can enjoy to ultimately enhance patient experience. For example, kids can fish for virtual salmon, step into a safari to touch and illuminate markings on a cave wall, generate jungle sounds on musical step pads, swat chirping bugs that glow during an engaging game that tests memory skills or play in a magical world of bubbles and dancing creatures from under the sea. 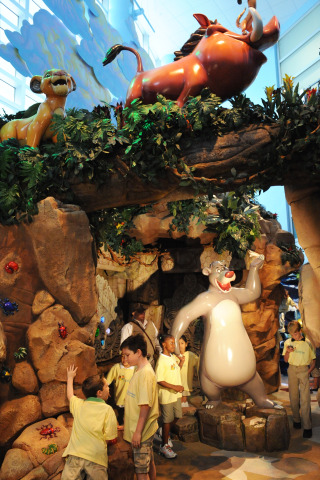 “This lobby was created with all the care and attention to detail that we devote to an attraction in our theme parks,” said Meg Crofton, president of Walt Disney World Resort. “It’s a place to leave worries behind and replace them with immersive, interactive fun. We’re delighted to have helped create a calm and relaxing environment for the children and families who will come here for care.”

As part of a part of a $10 million commitment by Walt Disney World Resort and Disney Worldwide Outreach, the lobby represents the first in a series of significant milestones for the Walt Disney Pavilion at Florida Hospital for Children. Construction and renovations are currently underway and will continue throughout the year to complete units and patient rooms. By early 2011, the addition including seven stories and more than 200 dedicated pediatric beds, will open featuring concepts, colors, sounds and themes inspired by the lobby design. While patients, families and visitors will enter through the lobby, the same calming and reassuring atmosphere will be reflected throughout the entire Walt Disney Pavilion at Florida Hospital for Children facility.