After Michael Jordan left the Napa Rose, everyone wondered who Disney could attract that would begin to fill Jordan’s shoes. Well, Disney went right to the top of the draft chart and found Philippe Tosques, former head of Jean-Georges Vongerichten’s Prime Steakhouse to oversee the resort’s flagship restaurant. 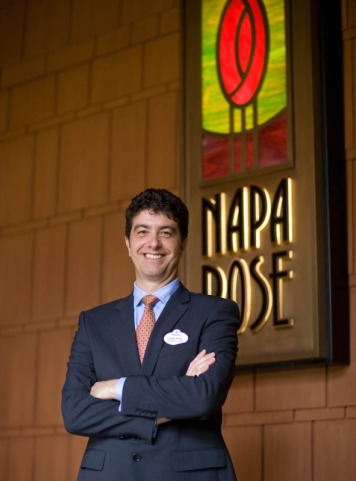 Tosques, who most recently oversaw operations for Jean-Georges Vongerichten’s Prime Steakhouse at the Bellagio in Las Vegas, is well-known for his high standards of fine dining and wine expertise. He has also been able to successfully lead and motivate teams to deliver exceptional dining experiences.

“Philippe’s expertise and passion for gastronomy, combined with his business acumen, make him an excellent choice for this role,” said Tony Bruno, vice president of Resort hotels and Downtown Disney. “The leadership he brings to the Resort will help continue the legacy for which the Napa Rose is known – and continue to fuel our ability to create new culinary experiences for guests to enjoy.”

“I feel Napa Rose and the Disneyland Resort are a great fit for me and I look forward to working with a team that values guest satisfaction and the culinary arts just as much as I do,” said Tosques. “I am really excited about this new venture in my career.”

Tosques began his career in 1984 as a waiter in Paris. He quickly worked his way up the ranks, learning from some of the best in the industry, including world-renowned sommelier Jean-Luc Pouteau and famous chef of nouvelle cuisine Gaston Lenotre, who he worked with at Le Pavillion Elysée in Paris. He also opened Le Jardin de Sens in Montpellier with Chefs Jacques and Laurent Pourcel.

In 1989, he set his sights abroad and moved to Chicago where he served as head captain at the Hotel Sofitel’s fine dining room, the Café de Paris. After a stint at the Hotel Sofitel Ma Maison in Los Angeles, Tosques returned to Chicago to work as the general manager of Chef Jean Joho’s Everest restaurant where he received numerous awards for his business performance.

Tosques moved to Las Vegas in 2003 to work with Chef Hubert Keller in opening the Fleur de Lys restaurant in Mandalay Bay. During the time the restaurant was being built, he opened Chef Keller’s Burger Bar – a designer eatery that included a hamburger combo that went for $5,000. Tosques’ service talents made an immediate impact to that organization, which received many awards and recognitions, including a mention as one of Bon Appetit’s 50 Hottest Restaurants.

Chefs Jean Joho, Hubert Keller and Jean-Gorges Vongerichten are originally from Alsace, France and all started their careers in the same restaurant, l’Auberge de l’Ill. Tosques is the only person who has been a general manager in each of their restaurants.

Tosques received his bachelor’s degree in hotel and restaurant management at the Lycée d’Hotellerie et de Restauration located in a suburb of Paris.

His bio is impressive, but it fails to mention if Tosques is a master sommelier as Jordan was. If not, hopefully, Disney will be making a hire there too.

previousCook Up some Gumbo to win a Princess and the Frog Blu-ray/DVD combo
nextThe Morning Report, return of