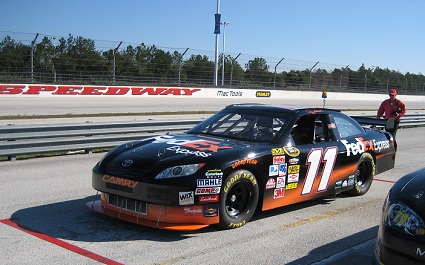 The cars look just like the real things on the track, but they’re specially built for the driving school.

This morning I had the absolute pleasure to participate in the Richard Petty Driving Experience at Walt Disney World Resort. The two and a half hour experience includes a driving school, photo session, and then actually laps driving on the track, the amount of which vary based on what package you purchase.

You can also just purchase a ride-along package, which is awesome in its own way since you actually get to go much faster than you would when you’re driving yourself.

The Walt Disney World Speedway was an actual operating race track for the few initial years after it was build hosting Indy Car and truck racing. These days it plays host to stock car and open wheel drivers who want to test their cars or get the feel for a new car model. Danica Patrick test drove her first Nascar Nationwide car at the track and Jamie McMurray, the winner of this year’s Daytona 500, did his final testing just a week before he won the big race. 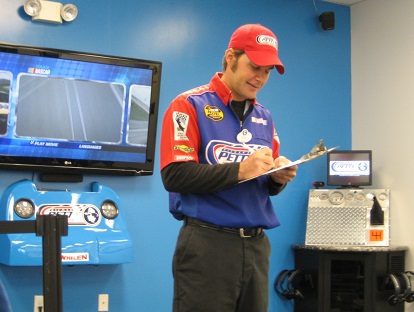 Don’t worry about inexperience. Your instructor, like Derek here, will show you the ropes.

If you know me, I’m not a skinny man by any means, but they had a race suit that fit me and others who were larger. And my biggest fear was I wouldn’t be able to get through the window, but it’s a fairly large 15 inches and no-one in our group wasn’t able to get in our out easily.

I participated in the 8-lap Rookie experience. After a few laps getting up to speed, I was soon driving laps that averaged more than 120 miles per hour. Woo. That was a huge rush.

The car really does turn pretty much on it’s own. Just drive it down to the while line when you’re in the corner and everything takes care of itself. But you don’t even have to worry about that, as you’re following a lead car that shows you exactly where to drive and how fast to go.

It really was easy and it was a ton of fun. We had absolute beginners in our group who had never driven a stick shift before and before you knew it they too were zooming around the track. 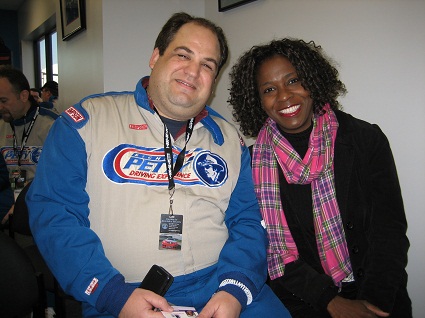 Myself and the fabulous Laura Spencer, who coordinates the Disney World Mom’s Panel.

Think this sounds like fun? If you have a Disney World Annual Pass you can get a free ride along experience now through the end of March 2010. The track is open from 9am-4pm and all you have to do is present your AP at the desk. If you’re a racing fan, or just like an adrenaline rush you can get even on the fastest roller coaster, I totally recommend you do it.

10 thoughts on “Drive like a champion at Walt Disney World”