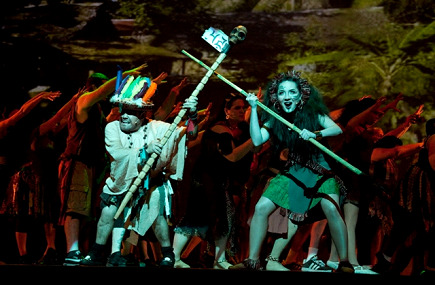 if there is one thing you can say about Disney Parks, it’s that they have the best Cast Members. Take for instance, the Flashback tradition at Disneyland. On February 16 and 17, after California Adventure closed for the day, nearly 300 Cast Members representing the two parks and the Resort hotels participated in the 12th annual Flashback, a Broadway-style musical at Hyperion Theatre. The annual Cast event raises funds for charities that support children. This year, ticket sale proceeds totaling $10,000 were donated to Discovery Arts, an organization that brings the theatre arts to children with cancer.

In honor of the Resort’s 55th anniversary, the theme of this year’s production was “Class of 55.” The show, composed of four mini musicals, was themed to Fantasyland, Adventureland, Frontierland and Tomorrowland. Rehearsals take place over several months with participants logging a total of nearly 30,000 VoluntEAR hours to make this fundraiser a success. Over the years, Flashback ticket sales have contributed more than $260,000 to local Orange County charities.