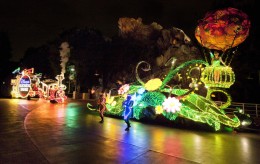 Tonight at the “What’s New, What’s Next” presentation for the media, Walt Disney World resort made some exciting announcements about what will be coming to the resort this summer. The big news is that Disney’s “Main Street Electrical Parade” will light up the streets of Magic Kingdom and headline a season of after-dark excitement they’re calling “Summer Nightastic!”

If that sounds familiar it’s because Disneyland tried a similar promotion last summer. The park was crowded all summer, but the promotion itself was a bit of bust. Themed summer promotions are a grand Disneyland tradition, and I’m curious to see how it will work in Florida.

Summer Nightastic isn’t the only thing coming from Disneyland. We’re also getting their electrical parade floats. This includes the newly constructed Pinocchio float and the new Tinker Bell float. After her first DVD came out, Tink replaced the Blue Fairy at the parade’s lead.

Here’s a look at what the summer will bring:

Don’t forget that the Wizarding World of Harry Potter will open this spring at Universal Orlando. So this announcement should been seen as Disney’s attempt to keep people on their property instead of at Hogwarts. Will an old friend of a parade and new fireworks be enough? That remains to be seen.

Update: Some things not mentioned tonight surprised me: Star Wars Weekends, Star Tours 2.0, anything new for EPCOT, and finishing Pop Century. Oh yeah, and Captain EO. Does that mean we don’t get the show here? Seriously. EPCOT needs a new country pavilion and they gotta do something with Future World.