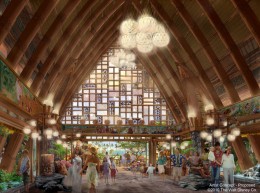 Pictured above we have a newly released rendering of the main lobby area for Aulani, a Disney Resort & Spa. Disney Imagineer Joe Rhode has been dispatched to keep an careful eye on the project and it looks like his background will come in very handy.

The highly anticipated Disney destination resort currently under construction on the Hawaiian island of O‘ahu now has an official name and a dynamic new Web site offering an inside look at the project. The resort’s name – Aulani, a Disney Resort & Spa, Ko Olina, Hawai‘i – reflects the company’s deep commitment to celebrating the islands’ rich history and traditions. Plans call for the first phase of the resort to open in fall 2011.

Disney has launched a new preview Web site, www.DisneyAulani.com, to provide updates and background information on the resort now under construction. The site also details some of the adventures and amenities under development, and includes conceptual art, descriptions of resort highlights, regularly updated resort information and photos of Aulani as it nears completion. (Artist Concept/Proposed. ©2010 The Walt Disney Co.)