President Obama mentioned the high speed rail project that will run from Tampa to the Orlando International Airport in the State Of The Union tonight. The project will get about 50% of the funding it needs from the federal stimulus package, with the rest, it’s assumed, coming in future budgets. So we don’t know if they’ll use that 50% to just build the northern part of the line (from MCO to Disneyland) or to start preparing the whole line. But we do know they’re planning a stop at Walt Disney World, because Meg Crofton has previous said Disney is willing to give up some land for the station. 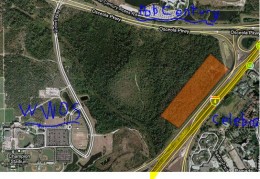 The Orange area is the proposed location for the station. The High Speed Rail line will go right up the middle of I-4 (highlighted in yellow) until it reaches the 528 (just north of SeaWorld). That puts the proposed station right between Osceola Parkway and ESPN Wide World of Sports, on Disney property. The former Disney owned town of Celebration is right on the other side of the I-4.

If this is the final location for the station, then I hope Disney quickly accelerates their plan to build out Pop Century with new family suites. Pop Century is the closed property to the station. This also gives Disney the chance to add a little rail of their own. Apeople mover, street car, or light rail line connecting Downtown Disney, WWOS,  and Disney’s Animal Kingdom would run right by this location and serve as a perfect way to move these new High Speed Rail passengers quickly to their destination in the resort.

I don’t know if there is space, but if Disney World would be willing to relocate their Casting building across from Downtown Disney, that would deposit all those High Speed Rail passengers right into the Downtown Disney Shopping area (via a very short people mover line or moving walkways).

Do you have a a preference for either location or suggest someplace else on Disney property adjacent to the I-4?

Meg Crofton has previous said Disney is willing to give up some land for the station.