Bruce Willis is back in action in the high-octane, adrenaline-fueled thriller Surrogates. They made me write that. But if you’re a fan of the fast paced action and like a science fiction thriller, than you’ll definitely want to pre-order Surrogates which is available on Blu-ray™ Hi-Def and DVD on January 26, 2010

Directed by Jonathan Mostow (Terminator Three: Rise of the Machines, U-571), Surrogates is a heart-pounding futuristic tale of splintered identity, treachery and murder. Both DVD and Blu-ray editions come with an array of bonus features that not only invite viewers to delve deep into the darkly imaginative world of Surrogates, but describe how this futuristic idea is not such a far-off reality. 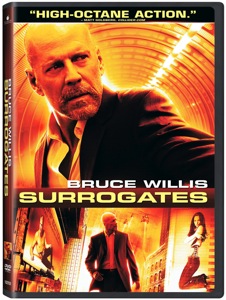 FBI agent Tom Greer (Bruce Willis) lives in a world where robotic surrogates stand in for people, protecting them from violence, contagion—and the appearance of aging. These picture perfect, real-life avatars—fit, good-looking, remotely controlled machines that assume their operator’s life role—enable the population to experience life vicariously from the comfort and safety of their own homes. Greer and his partner, Agent Peters (Radha Mitchell), are called in to probe the mysterious death of a college student, whose life ended when his surrogate was destroyed. When Greer’s surrogate is damaged in the investigation, he ventures out of his apartment for the first time in decades. In a world of masks, Greer must decide who is real and who can be trusted.

· “I Will Not Bow” Music Video by Breaking Benjamin

The Surrogates Blu-ray contains the DVD extras plus exclusive bonus features that go into the heart of the film’s intriguing premise:

· A More Perfect You: The Science of Surrogates — The world of surrogates is not far away! Mind-controlled robotics is already in use in today. This featurette explores the realities of this technology and offers an in-depth look into the creation of the superhuman versions of the cast created for this film.

· Breaking the Frame: A Graphic Novel Comes to Life — A visual exploration of the evolution of Surrogates from graphic novel to major motion picture from the earliest designs and sketches. Pivotal sequences come to life in a dazzling 3-D animated experience.