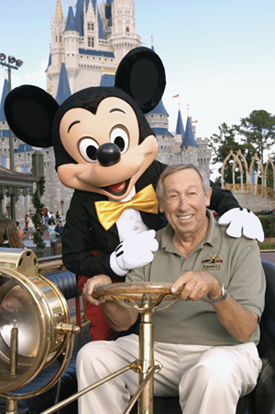 Disney played a key role in the revitalization of The Walt Disney Company and Disney’s animation legacy. He was associated with the Company for more than 56 years, and from 1984-2003, served as vice chairman of the Company’s board of directors and chairman of the Studio’s Animation department. In recent years, he held the title of director emeritus and consultant for the Company.

As head of Disney Animation, he helped to guide the Studios to a new golden age of animation with an unprecedented string of artistic and box office successes that included The Little Mermaid, Beauty and the Beast, Aladdin, and The Lion King.

Commenting on the announcement, Bob Iger, president and CEO of The Walt Disney Company, said, “On behalf of everyone at Disney, we are saddened by the loss of our friend and colleague Roy E. Disney. He was much more than a valued 56-year Company veteran – Roy’s true passion and focus were preserving and building upon the amazing legacy of Disney animation that was started by his father and uncle.”

Disney was born in Los Angeles on January 10, 1930 to Roy O. Disney and Edna Francis Disney. His father and his uncle, Walt Disney, co-founded the Disney entertainment business in 1923.

After attending Harvard School and Pomona College, Disney joined The Walt Disney Studios in 1953 as an assistant film editor. He produced and directed several TV and theatrical productions before leaving the Company in 1977 to become an independent producer and investor.

Disney is survived by his wife, Leslie, and four children from his marriage to Patricia Dailey Disney — Tim Disney, Roy Patrick Disney, Abigail Disney and Susan Disney Lord. He also is survived by 16 grandchildren.