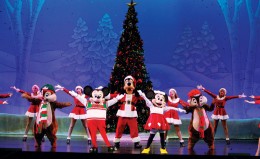 Every year at the beginning of the Holiday season my family went to see the Radio City Christmas Spectacular in New York City. When I attended in the early and mid-nineties the show included a version of “A Christmas Carol”, which to this day I still remember vividly and brings me back to the wonder of the holiday season in New York. Needless to say I entered with high expectations and hopes that Disney’s A Christmas Carol could return that sense of child-like wonderment. 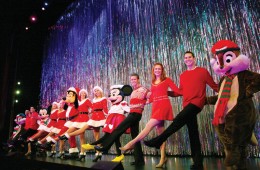 As always The El Capitan was an assault on the senses. The garlands strung across the red suede draped interior wall between the lobby and the theater are the first evidence of Christmas cheer. As you head to your seats the huge garlands strung across the sides of the theater lovingly usher you into the holidays. Rob Richards’ fabulous renditions of Christmas songs on The “Mighty Wurlitzer” are the final touch completely enveloping you in the holiday spirit.

At the El Capitan, Disney often likes to create pre-shows for their movies which usually involve the featured characters appearing and dancing to a musical number. This is fun and the children love it. While marketed as “Disney’s Holiday Spectacular”, I expected something similar. I was wrong. The Disney Holiday Spectacular is a large production with five characters and 10 singers and dancers, not to mention multiple sets and numbers. I was completely blown away by what Disney put on; all of the classic Christmas carols are included. The show goes out with a bang, which I wouldn’t want to spoil, but let’s just say it involves high-kicks that rival the Rockettes and a little white Christmas. Usually the pre-shows at the El Capitan are mostly for the kids, but by the last number I doubt there was anyone who wasn’t singing along.

Robert Zemeckis has created a movie, which is not only a wonderful and fitting adaptation of the Charles Dickens novel, but one that also manages to do so while appealing to the whole family. Some have questioned whether it is appropriate for children and while there are some frightening scenes all the kids in my screening handled it very well. This latest rendition of A Christmas Carol breathes life into a story so prevalent it has descended into cliché and manages to imbue the Christmas spirit in each viewer.

I’ve often questioned the use of motion capture technology and 3D as they seemed to be a gimmicks not necessary to enhance the plot, A Christmas Carol has given me at least one example where this is not true. These technologies as well as the ability of director Robert Zemeckis help you fly through London and into Ebenezer Scrooge’s past, without even getting dizzy. This film made me glad that Disney had not attempted this earlier, because I can’t imagine a better film. As soon as I left the theater I wanted to see it again, I hoping I can wait to go with my family, on Christmas day.

If you live in the Los Angeles area I highly recommend you check this out at the El Capitan, where it is playing until January 3rd, including Thanksgiving, Christmas, and New Years. Even if you don’t live in Los Angeles it’s worth checking out in the theaters, as Robert Zemeckis’ use of 3D is by far the best I’ve seen.