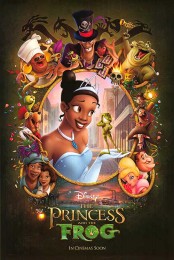 ‘Tiana’s Showboat Jubilee!’ is a new concept in entertainment for Walt Disney World’s Magic Kingdom. The show will introduce park guests to the characters of Disney’s next animated hit – The Princess And The Frog – and it will give select guests a taste of showbiz as they become part of the show.

For more than 6,000 Walt Disney World guests, a 10-week limited engagement of the entertainment spectacular “Tiana’s Showboat Jubilee!” in Magic Kingdom will be an opportunity to get a taste of showbiz – or in Disney parlance, “be part of the magic.”

The swinging musical show being presented in conjunction with the upcoming Disney animated feature, “The Princess and The Frog,” will treat theme park guests to a rousing revue of song and dance from aboard the Liberty Belle riverboat. Three times daily, Oct. 26 through Jan. 3, 2010, the riverboat will pull away from the dock in Liberty Square with a live six-piece jazz band, 22 dancers and 30 theme park guests who have been randomly preselected earlier in the day by Magic Kingdom cast members.

But the park guests will not be “just along for the ride.” As the Liberty Belle glides along and the band plays “Down in New Orleans,” the guests and dancers will be waving hankies along to the music. And when the riverboat, festooned with green, purple and yellow bunting and sparkling beads, stops in Frontierland, the guests continue their role: Dressed in choir robes, they move large musical notes in time with the music, and then shake and rattle tambourines.

When the show concludes and the Liberty Belle resumes its travels on the Rivers of America, the theme park guests are treated to a meet-and-greet with the newest Disney royalty, Princess Tiana and Prince Naveen – the stars of “The Princess and The Frog,” which premieres in late November.

Three performances of “Tiana’s Showboat Jubilee!” are planned daily. Viewing locations are in Liberty Square and Frontierland. I’m getting a first hand look at the show on Monday and will report back after that.