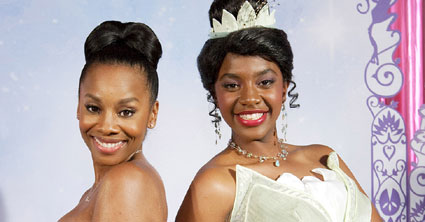 For those looking for the next character meet and greet, keep an eye open for Princess Tiana. Tony Award winner Anika Noni Rose (left), who provides the voice of Disney’s newest princess, Tiana, in the upcoming Walt Disney Pictures animated feature film “The Princess and the Frog,” poses with the new Princess Tiana character (right) as she will soon appear at Disneyland Resort in California and Walt Disney World Resort in Florida.

The meeting last week event marked the very first public appearance of the Princess Tiana theme park character and took place during the 2009 National Association of Black Journalists (NABJ) Annual Convention in Tampa, Fla. In addition, Rose performed a song from the film for convention-goers. “The Princess and the Frog” film will premiere in theaters nationwide Dec. 11, 2009. (Matt Stroshane, photographer)