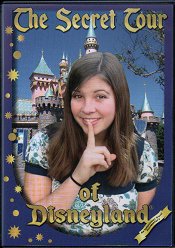 The Secret Tour of Disneyland is a fan produced tour of Walt Disney’s Magic Kingdom that’s chock full of fun, facts, and trivia about the park. The DVD production and script approaches Travel Channel quality and the host Lauren Delmont could some day give Samantha Brown a run for her money. By far the best quality fan DVD I’ve seen so far.

I know that if ‘Secret Tour’ had been around when I was a kid, I would have worn a rut in it watching it over and over again. But this DVD couldn’t have been around when I was a kid, because it is a mostly up to date tour of the park (there are a few bits that have changed since it was released in 2008). The research on this DVD was obviously done with love and many many visits to the park.

The ‘Secret Tour’ is appropriate for all levels of Disneyland fandom. My 6-year old son enjoyed learning about the park and its history, while myself (someone who knows every on-stage nook and cranny and some backstage areas) even learned a thing or two. It’s also sprinkled with useful tips you can use on your next visit to Anaheim.

The only general complaint in my house was the length. But I really see that as a strength. The two and a half hour tour really allows them to cover a lot of territory. Since it’s a DVD, just hit pause if you need to take a break.

Finally, here’s the trailer they created for the DVD.

Buy it now on LaughingPlace.com’s store and save 15%.

4 thoughts on “The Secret Tour of Disneyland – DVD Review”