Hip-hop artist Big Boi, one-half of the Grammy Award-winning duo “OutKast,” poses July 24, 2009 with Minnie Mouse at the Magic Kingdom. I love how Disney is able to get these random celebrities to pose for photos. Click through the image for a larger version. 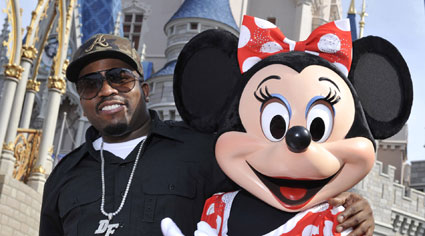 Big Boi (born Antwan Andre Patton) is scheduled to release his first solo album, entitled “Sir Luscious Left Foot: The Son of Chico Dusty” in 2009. In addition to his work with OutKast, the Atlanta-based artist and producer has appeared on tracks by Beyonce, Jay-Z and Missy Elliott. In 2008 he collaborated with the Atlanta Ballet for a series of critically acclaimed performances. He is visiting the Walt Disney World Resort on vacation this week. (Photo courtesy Disney World. Garth Vaughan, photographer)