Someone at Disney has leaked what appears to be very real blueprints laying out all the new ‘attractions’ planned for an expanded Fantasyland at Walt Disney World’s Magic Kingdom. This plan matches what I’ve heard from other sources. My gut tells me it’s not something fan created and is actually from the halls of WDI in Glendale. Now the question is, has all this been approved for construction? If so we should start seeing bulldozers pushing dirt as soon as October. I won’t believe any of this is true until we do. 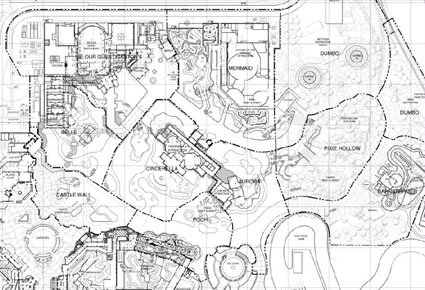 So what will the expanded area consist of? It remakes everything from where the current Little Mermaid meet and greet is, moves Dumbo, and goes back to the service road all the way across to the existing Toon Town Fair tents. The only attraction that will remain from the existing Toon Town is Goofy’s Barnstormer. Dumbo will now be located across from the Barnstormer and will be expanded to two spinners doubling the capacity of that popular attraction.

The rest of the expansion is dedicated almost entirely to the Pixie’s and Princesses that has become the marketing and merchandising focus of the Walt Disney Company the last few years. There are three new meet and greets Pixie Hollow is expanded, Cinderella gets a larger meet and greet, Princess Aurora (aka Sleeping Beauty) also gets a spot. I think calling a meet and greet an attraction is a bit of a stretch, but there are ways to expand the experience and elevate it to attraction level. Let’s hope that’s in the budget.

Ariel, the Little Mermaid has a meet and greet too, but she also gets a whole new attraction (essentially a clone of what is now under construction in California). It looks like Belle gets a meet and greet and a new “Be Our Guest” restaurant. At one time there was a Dinner Theatre restaurant by that name planned for Disneyland Paris, I wonder if they’re reviving that concept. That’s certainly something the Magic Kingdom has been lacking and I can see the long lines forming now for reservations.

What’s missing from the earlier rumors? One more roller coaster for the area. There was supposed to be a Snow White Mine Ride. Although I’m glad they’re not building that if it meant removal of the existing Snow White attraction. Perhaps Goofy’s Barnstormer will get rethemed to the Mine Ride.

My thoughts on this plan? It’s exactly what I would expect Disney World to come up with as an answer to Universal’s Wizarding World of Harry Potter. Disney is essentially writing off the tween boys and focusing all their attention on the girls with the idea that moms and their daughters control the vacation purse strings.

There’s only so much you can tell from a blueprint (assuming this is the final version). But I like what I see if that’s Disney’s choice. I would have liked to see a bit more balance and, perhaps, a new C or D ticket as well. I’m also curious to see if the rest of Fantasyland gets a retheming as well.

So assuming that this is the real thing. What are your thoughts?