4th of July Fireworks at the Magic Kingdom 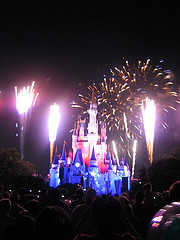 Spent the night of July the 3rd at the Magic Kingdom to see their 4th of July Fireworks one night early. For anyone going tonight, you might want to get on the road now to see it yourself. I got some great photos, but there is no way to appreciate this show via photos or video.

The show producer uses fireworks like paint and punctuation and they surround you front, back, and sides with all the pyrotechnics you could possibly fit into 17 minutes. Plus, since its Disney, there’s a great story and fabulous music to go along with it.

I’ve put up a Flickr set with the best shots from last night. If you aren’t going tonight, you’ll at least get a taste of what you’re missing.

The crowds last night were pretty crazy, but Disney had a pretty decent Guest Control plan in place. Where we were, on the Tomorrowland side of the hub, cast members made announcements about how guest control would work between the end of fireworks and the parade, so everyone was aware of where to go.

Basically, everyone in the Magic Kingdom was routed through Fantasyland or Tomorrowland down to where the old Galaxy Theater was located. From there the crowds went backstage into a parking lot and then out into Town Square. Alas, there were still a few bottlenecks, but for the most part, moving bodies around kept traffic flowing between the fireworks and the aprade.

We took our time and wandered around a few stores to let the crowds thin down before before heading out ourselves. A good strategy if you’re going tonight.

1 thought on “4th of July Fireworks at the Magic Kingdom”