The Independence Day weekend means firework. In Central Florida the place to be is either at the Themeparks or at the Firecracker 400 (now the Coke Zero 400, but whatever). Usually the weekend finds NASCAR drivers out at the theme parks, but not until after the race. This year a few of NASCARs biggest drivers, Kyle Busch and Scott Speed, made a special “pit stop” at Discovery Cove in Orlando. 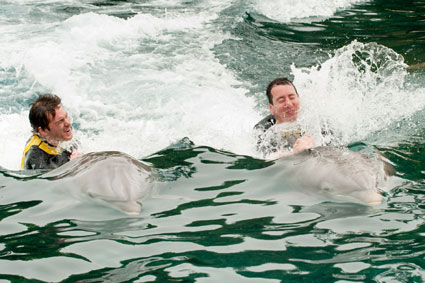 KYLE BUSCH AND SCOTT SPEED FACE OFF AT DISCOVERY COVE – Leading up to the big race in Daytona, NASCAR drivers and friends Kyle Busch (R) and Scott Speed (L) went head-to-head at Discovery Cove in Orlando on a different kind of vehicle – Atlantic bottlenose dolphins. The drivers also snorkeled with rays and tropical fish, hand-fed exotic birds and relaxed on pristine beaches at the all-inclusive park. 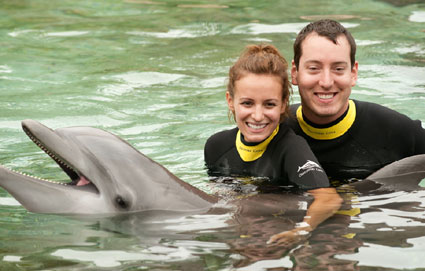 NASCAR’S KYLE BUSCH AND GIRLFRIEND VACATION AT DISCOVERY COVE – NASCAR driver Kyle Busch and his girlfriend enjoyed swimming with dolphins at Discovery Cove in Orlando before the big race in Daytona. Discovery Cove is an all-inclusive tropical retreat where guests can swim with dolphins, snorkel among fish and rays, hand-feed exotic birds and relax on pristine beaches. 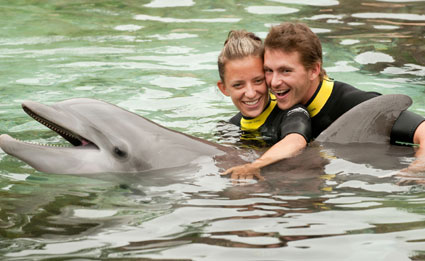 NASCAR’S SCOTT SPEED AND FIANCÉE VACATION AT DISCOVERY COVE – NASCAR driver Scott Speed and his fiancée got up close and personal with an Atlantic bottlenose dolphin, Dexter, at Discovery Cove in Orlando. They arrived in town early to relax before the big race in Daytona.