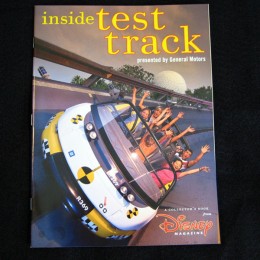 I was at EPCOT yesterday and managed to sneak in a ride on Test Track. GM’s imprint via name, vehicles, and brands is still all over the attraction. Frankly, it seemed a bit of a disconnect from what everyone knows is going on with the company trying to reinvent itself. While the post-show showroom, however, is looking the emptiest I’ve ever seen it, they did have the new Camero on display (and it looks amazing).

This morning the Orlando Sentinel reports on the progress of negotiations between Disney and GM. The expiring sponsorship deal was for a reported $10 million a year, which GM paid mostly upfront.

GM also spends between $1 million and $2 million a year operating a post-ride showroom inside the attraction, with more than a dozen vehicles on display and terminals that guests can use to order sales brochures.

The company’s contract-extension talks with Disney have been further complicated by the involvement of the federal government, which has kept GM afloat with tens of billions of dollars in loans and is about to become majority owner of the iconic company. Some worry the company could face a public backlash if it is seen as using taxpayer money to underwrite a theme-park ride.

I personally think it makes great sense for GM to keep this facility open with their brand on it. It’s great PR, not just for the domestic audience they reach, but internationally. If anything GM should work with Imagineering to help reshape their message to enforce the new reality of GM going forward. Disney and GM can partner getting the word out as well.

What say you now that the American Government is a 60% shareholder in the automaker?