Disneyland Hotel to finally get makeover it deserves

From almost the moment the Walt Disney Company took over ownership of the Disneyland Hotel from the Wrather company in 1988 the question has been, will they keep the towers or remodel them. So far during every renovation the answer has ‘keep the towers’.

There had been some rumors that one or more of the towers was scheduled for demolition in the next scheduled renovation, but it now looks like that plan has been scuttled (likely due to the economy) and again they’ll be focusing on making each room a masterpiece as best they can while constrained by the original tower specifications.

That said, there’s a lot of really cool stuff included this time around, including another remake of the hotel grounds, green upgrades, and some crafty use of fiber optics to make your hotel stay dramatically more magical. For instance, the backboard (seen above) features fiber optic fireworks above Sleeping Beauty Castle and a hidden mickey too!.

The full press release highlighting this round of changes, along with more photos of what the finished room will look like, is below the cut:

Beginning in August 2009, Southern California’s landmark Disneyland Hotel will start a significant renovation project that will include major improvements to its guest rooms and considerable changes to the exterior of the hotel. The hotel will remain open during the renovation, which will be conducted in phases, and is scheduled to be completed in 2012. 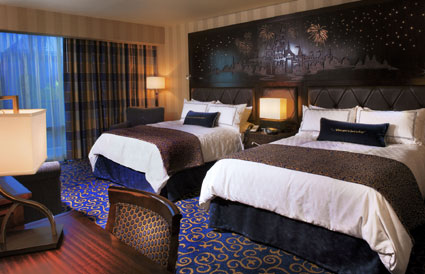 “We are excited to embark on the largest and most extensive renovation of one of Disney’s classic hotels,” said Disneyland Resort President Ed Grier. “This renovation provides us with the opportunity to bring new magic to this historic hotel, which enables us to enhance the Disney experience that our guests have come to expect. “It also reinforces our ongoing commitment and investment in the Anaheim Resort District – working with the city and area businesses to continue to evolve the District into a world-class, multiday tourist destination,” added Grier.

Disneyland Hotel’s renovated guest rooms will feature an all-new contemporary look with exquisite Disney touches woven into the décor. A stunning new headboard that features an artistically carved representation of Disneyland Park’s famous Sleeping Beauty Castle will serve as the focal point in each guest room. The background on the headboard uses fiber optics to create a magical skyline with fireworks – bringing the immersive park experience into the room. Rooms also will feature black and white art that will take guests back in time, reinforcing the nostalgia and history of Walt’s first theme park. 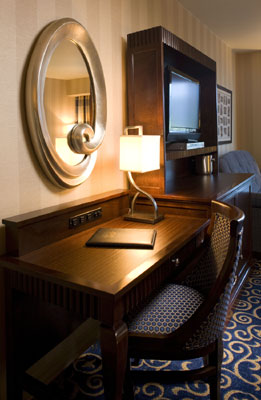 Disneyland Resort’s original hotel, built in 1955, also will experience a noteworthy change to its exterior.  All of the three towers will feature an updated look, with large windows that will give the outside a sleek, radiant blue tint. The windows will replace the current sliding doors and faux balcony railings and are specially designed to be energy efficient and to extensively filter outside noise. 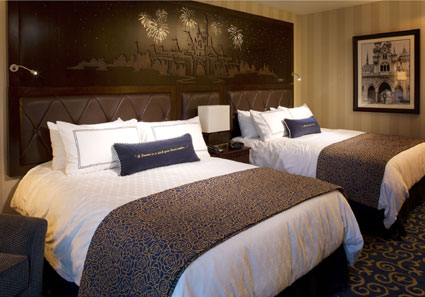 “The new design for the hotel’s exterior will enhance the existing towers and compliment the Resort as a whole. The windows will feature a sky blue reflective glass that channels the feel of our bright California sky,” said Mike Montague, director of resort development for Walt Disney Imagineering.

The Disneyland Hotel is composed of three main structures – the Magic, Wonder and Dreams towers. Construction will take place in one vertical half of a tower at a time – leaving the rest of the tower open for guests. The Dreams tower will be the first to be renovated and is scheduled to be completed in June 2010.

Popular Choice for Convention Visitors
In addition to being a top choice for vacationing families, the Disneyland Hotel has long been a favorite for meeting and convention planners because of its prime location and size – and direct access to more than 136,000 square feet of convention space.  Anaheim hosts hundreds of groups each year and the renovation will help maintain the city’s premiere position as a meeting destination.

“We are thrilled with Disney’s plans to renovate the Disneyland Hotel,” said Charles W. Ahlers, president of the Anaheim/Orange County Visitor and Convention Bureau.  “With the renovation of the hotel and the expansion of Disney’s Grand Californian, coupled with other new hotel developments that are coming to Anaheim over the next few years, our city will continue to be a premier destination for convention and meeting planners.”

Energy Efficient Enhancements
As with other construction and enhancements that are underway throughout the Disneyland Resort, the renovation will include energy efficient upgrades. The most notable feature will be the hotel’s new windows.  With their reflective capabilities and double-pane glass, the windows will change the look of the exterior of the hotel dramatically, while reducing energy consumption by keeping guest rooms at the desired temperature.

The use of occupancy sensors in guest rooms, low-flow toilets, energy efficient light bulbs and paint low in volatile organic compounds are just a few more of the ways that the hotel will offer guests a “green” lodging experience.

Renovation is Part of Larger Resort Expansion
The Disneyland Hotel renovation is a part of a larger expansion project underway throughout the Resort. Disney’s California Adventure Park is undergoing a multiyear expansion project that includes new experiences, attractions and night-time spectaculars, culminating in 2012 with the opening a brand new land – Cars Land.  The four-star Disney’s Grand Californian Hotel & Spa is also undergoing an expansion, adding 200 hotel rooms and 50 two-bedroom villas that are part of the Disney Vacation Club, which will make its first West Coast debut when it opens in the fall of 2009.