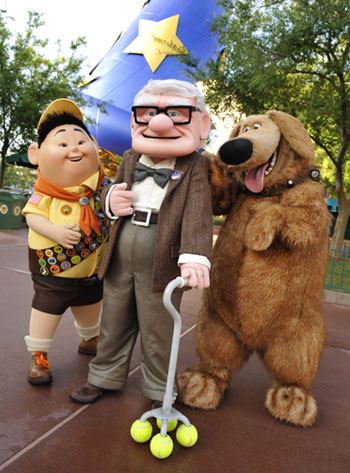 If reviewer and Cannes accolades are any indication, Pixar looks to have another hit on their hands with “UP”. Disney’s Hollywood Studios will attempt to capitalize on the film’s good standing by offering guests a chance to get their photos with the main characters.

Above the three characters — (L-R): Russell, an eight-year-old Wilderness Explorer; Carl Fredricksen, a 78-year-old balloon salesman; and Dug, a dog — pose in front of the park’s Sorcerer Hat icon. Day to day, the three characters will make regular meet-and-greet appearances for guests inside the theme park’s “Magic of Disney Animation” attraction. “UP,” the 10th film from Disney-Pixar, debuts in U.S. theaters nationwide on May 29, 2009. (Photo courtesy Disney. Gene Duncan, photographer)