Beginning tomorrow the Walt Disney Company will launch “Disney’s Friends fro Change: Planet Green” a new multiplatform environmental initiative across the Disney Channel, Disney XD, Radio Disney and Disney.com featuring a star-studded lineup of Disney’s young talent pledging environmental stewardship and encouraging other kids to do the same. Along the way kids’ votes will determine how Disney will divide $1 million in donations to green causes. 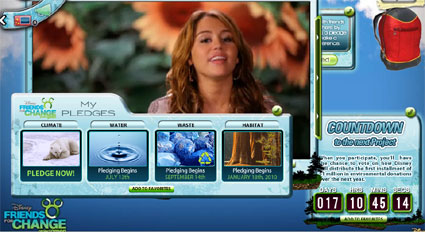 Disney stars Miley Cyrus, Selena Gomez, the Jonas Brothers, and Demi Lovato are among the 29 young stars participating in outreach messages as part of the Disney’s Friends for Change: Project Green initiative. Young people will join together to help the environment across four key areas: climate, water, waste and habitats. Kids will learn practical ways to preserve the planet, track their collective impact and have the opportunity to vote on how $1 million in donations from Disney will be divided and invested in various environmental causes over the course of a year.

If 500,000 kids participate in Disney Friends for Change: Project Green events, together they can:

“With Disney’s Friends for Change, we’re empowering kids to tap into the potential that lies within each and every one of them to make a difference,” said Bob Iger, president, The Walt Disney Company. “Building on our recently announced environmental goals, this program highlights what is possible as we leverage Disney’s reach to educate and inspire environmental stewardship in others.”

Starting tomorrow visit Disney.com and look for this logo to join Disney’s Friends for Change:

previousDancing with the Stars: Semi Final Results
nextLost 5.16 & 17: The Incident