This April, Disney’s Miramax film studio has two DVDs out that are a must have for any collection. Best Picture Oscar winning No Country for Old Men set a new standard for action-thrillers. Doubt won five Oscar nominations and is an acting tour de force.

When you sit down to watch a Coen brothers film you should have a set of expectations. There will be violence, exploration of human suffering, and excellence in film making. No Country for Old Men reached the peak of excellence deservedly winning the 2007 Academy Award for Best Picture, and the Oscar for Best Actor in a Supporting Role (Javier Bardem), among others. 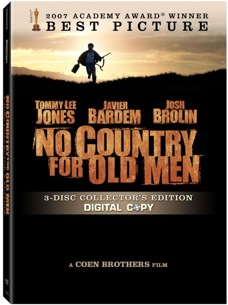 The Coen Brothers deliver a sizzling and supercharged action-thriller with No Country for Old Men, based on the novel by Pulitzer Prize-winning author Cormac McCarthy. Llewelyn Moss (Josh Brolin), a down-on-his-luck Vietnam vet, stumbles across an illicit fortune and decides to keep it, setting off an unstoppable chain of violence.

When Moss discovers a drug deal gone bad in the West Texas desert, he decides to keep the two million dollars he finds there and hit the road. In short order, both Ed Tom Bell (Tommy Lee Jones), the local sheriff, and Anton Chigurh (Javier Bardem), one of the most frighteningly amoral psychopaths in film history, are on his trail and Moss is scrambling to stay one step ahead of the law—and avoid a gruesome fate at Chigurh’s hands. Javier Bardem’s role as death personified is one that will deservedly be remembered for ages.

The 2007 Oscar® winner for Best Picture, No Country for Old Men, arrived in new collectible three-disc DVD and 2-disc Blu-ray editions from Miramax Films, Paramount Vantage, and Walt Disney Studios Home Entertainment. Acclaimed filmmakers Joel and Ethan Coen’s most gripping and ambitious film, No Country for Old Men – Collector’s Edition comes with more than five hours of bonus features, available on DVD and Blu-ray for the first time ever, including extensive interviews with the filmmakers, stars and technical team behind this unforgettable thriller. From an unauthorized trip backstage with star Josh Brolin, to an insider’s look at the unique moviemaking process of the Coen brothers, fans will get unprecedented access to the story behind the celebrated movie. In addition, both the DVD and Blu-ray versions include a special digital copy of the movie that enables viewers to enjoy it anywhere, anytime in their choice of iTunes or Windows Media formats.

Doubt is set in 1964 and based loosely on real events. The nation is at a crossroads. Stay in the past or be dragged into a new and uncomfortable future. The feeling of doubt moves through all the characters lives and the audience’s mind as the film progresses. Whether we get an answer is up for debate, but there is no doubt that you will enjoy the performances in this movie.

St. Nicholas Church in the Bronx finds Fr. Brendan Flynn’s (Philip Seymour Hoffman) progressive views and charismatic presence have won him the respect and admiration of the congregation. At the parish school, principal Sister Aloysius Beauvier (Meryl Streep) keeps her students in line with old-fashioned fear and intimidation. When young Sister James (Amy Adams) shares with Sister Aloysius her concern that that Father Flynn has “taken an interest” in twelve-year-old Donald Miller (Joseph Foster), the school’s “first Negro student,” the older nun launches her own investigation. Determined to protect every one of her charges, Sister Aloysius attempts to use the evidence she discovers to have Flynn removed from the school. John Patrick Shanley’s finely shaded script takes audiences through a spectrum of truth, emotion and belief, and asks if any decision is ever free from doubt.

It was one of the biggest upset of the 2009 Academy Awards that the film didn’t receive a single Oscar, despite being up for five of them. Both the DVD and Blu-ray Hi-Def versions of Doubt include some great bonus features including an audio Commentary from the writer/director.

More details on Both DVD’s below the cut:

A masterful mixture of suspense, black humor and A-list talent delivering once-in-a-lifetime performances, No Country for Old Men is a brilliantly told game of cat and mouse guaranteed to keep fans on the edge of their seats right up to its heart-stopping final act. Nominated for eight Oscars, the film took home statuettes for Best Picture, Best Directing, Best Adapted Screenplay and Best Actor in a Supporting Role (Javier Bardem).

• The Making Of No Country For Old Men – A behind-the-scenes look at what it takes to create a Coen Brothers’ movie.
• Working with the Coens – The cast and crew of No Country for Old Men talk about working with the legendary duo.
• The Diary of A Country Sheriff – A look at the relationship between Javier Bardem’s Anton Chigarh and Josh Brolin’s Lewellyn Moss through the eyes of Sheriff Ed Tom Bell (Tommy Lee Jones).
• A treasure trove of in-depth interviews and conversations with the Coen Brothers, Tommy Lee Jones, Josh Brolin and Javier Bardem—never before available on disc—offering viewers the most comprehensive look ever at the making of No Country for Old Men.
• Digital Copy Download

The Coen Brothers deliver a sizzling and supercharged action-thriller with No Country for Old Men, based on the novel by Pulitzer Prize-winning author Cormac McCarthy. Llewelyn Moss (Josh Brolin), a down-on-his-luck Vietnam vet, stumbles across an illicit fortune and decides to keep it, setting off an unstoppable chain of violence. When Moss discovers a drug deal gone bad in the West Texas desert, he decides to keep the two million dollars he finds there and hit the road. In short order, both Ed Tom Bell (Tommy Lee Jones), the local sheriff, and Anton Chigurh (Javier Bardem), one of the most frighteningly amoral psychopaths in film history, are on his trail and Moss is scrambling to stay one step ahead of the law—and avoid a gruesome fate at Chigurh’s hands.

DOUBT
On DVD and Blu-ray™ Hi-Def

From producer Scott Rudin (No Country for Old Men) and Miramax Films, Doubt, one of the most riveting and talked about films of the year, comes to DVD and Blu-ray™ Hi-Def on April 7, 2009 from Miramax Films. The recipient of five 2009 Academy Award® nominations and on over 50 top 10 lists, Doubt brings to blistering life a battle royale between old guard and free thinker, played out in a crucible of sexual politics and religious piety. Its razor-sharp, whip-smart story and top-notch cast will have viewers buzzing long after the credits roll. A series of thoughtful and revealing bonus features illuminate the creative process behind this remarkable film.

Two-time Oscar® winner Meryl Streep (Best Actress in a Supporting Role, Kramer vs. Kramer, 1979; Best Actress in a Leading Role, Sophie’s Choice, 1982), Oscar winner Philip Seymour Hoffman (Best Performance by an Actor in a Leading Role, Capote, 2005), Amy Adams (Enchanted) and Viola Davis (Nights in Rodanthe) deliver fierce, unflinching performances in a story defined by the quest for truth, the forces of change and the devastating consequences of blind justice in an age defined by moral conviction.

Bonus Features
Both DVD and Blu-ray Hi-Def versions of Doubt include the following bonus features:
• From Stage to Screen—An intimate discussion with playwright, screenwriter and director John Patrick Shanley about the history of Doubt, including his inspirations for the story, the acclaim the play’s Broadway run received, the Pulitzer Prize and the process of adapting it for the screen. Joining the conversation are Meryl Streep and Sister Margaret McEntee (a consultant on the film and Shanley’s former teacher).
• Scoring Doubt—Renowned composer Howard Shore discusses his inspiration for the music in the film and his collaboration with both John Patrick Shanley and producer Scott Rudin.
• The Sisters of Charity—In an insightful and lively dialogue, Meryl Streep and John Patrick Shanley discuss the interviews that Shanley did before shooting with real nuns to discuss their lives and make sure they would be accurately portrayed in the film.
• Feature Commentary with John Patrick Shanley
• The Cast of Doubt—A conversation with actors Meryl Streep, Philip Seymour Hoffman, Amy Adams and Viola Davis.
Feature run time: 104 minutes
Rated: US: PG-13 (For Thematic Material)
Technical specifications may only apply to feature
Aspect ratio: Widescreen (2.35:1) Aspect ratio – Enhanced for 16X9
Televisions
Sound: English Dolby Digital 5.1 Surround
Languages: Spanish Subtitles