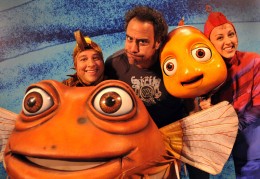 Here’s another great celebrity moment that could only happen at Walt Disney World. Comedian Brad Garrett (“Everybody Loves Raymond,” “‘Til Death”) does his best blowfish impression alongside two characters from the “Finding Nemo – The Musical” show at Disney’s Animal Kingdom.

The show is based on the animated Disney-Pixar film “Finding Nemo.” Among the show’s featured characters are “Bloat,” a blowfish (left), who was voiced by Garrett in the feature film, and Nemo (right), a clownfish and star of the film and musical show. Disney’s Animal Kingdom is one of four theme parks at the Walt Disney World Resort.