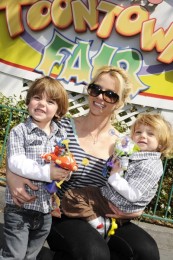 Britney Spears poses March 5, 2009 with her two sons Preston (left) and Jayden (right) in Mickey’s Toontown Fair at the Magic Kingdom. Spears just kicked off her international “Circus” concert tour. As a young performer, one of Spears’ big breaks came as a cast member on an updated version of “The Mickey Mouse Club,” which taped episodes at Walt Disney World in the 1990s. (Photo Courtesy Disney. Diana Zalucky, photographer)