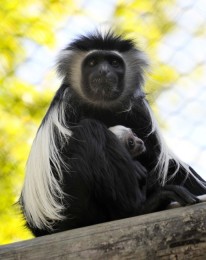 Walt Disney World Resort recently welcomed a black and white colobus monkey – the first of its species born at Disney’s Animal Kingdom. The infant arrived February 17 after a six-month gestation and may be seen along the Pangani Forest Exploration Trail with a group of five other colobus monkeys.

While the weight, size and gender are still unknown, animal care experts are encouraged by the amount of care given by first-time mother, Kabibi. “The baby was born looking healthy and vigorous,” said Rebecca Phillips, a primate manager at Disney’s Animal Kingdom. “We’re encouraged that the mother and baby seem to be adapting well.”

At birth, colobus monkeys are covered in white fur that is gradually replaced with black hair matching the adults. The monkeys are distinguished by their black body and white shoulders, backs and beard. The monkeys stand between 18- and 27-inches tall and weigh approximately 12 to 32 pounds. Unlike most primates, the colobus do not have thumbs, although they have long tails that help them navigate through the forest quickly.

If you needed another reason to get back out to DAK, this just might be it.