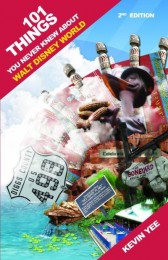 Disney author and pundit Kevin Yee has updated his popular 101 Things You Never Knew About Walt Disney World trivia book. The new version is significantly longer and plussed with pictures of many of the ‘things’ Yee explores.

To call 101 Things a trivia book is a bit unfair. While there are indeed over 200 pieces of trivia explored inside, the book doesn’t follow the usual question and answer format, but rather takes the form of something more akin to a walking tour of the four theme parks. In fact, I would highly recommend that repeat visitors to Walt Disney World pack this book and bring it into the parks for a richer experience.

My two complaints about the book have to do with how sometimes the photos don’t seem to go with the ‘things’ being described or a more accurate photo is available but wasn’t used. The other being how some of the names in the book are just thrown in and their personal contribution to the theme parks are skipped over.

Get your copy of the updated “101 Things You Never Knew About Walt Disney World” at the LaughingPlace.com Store while this discount applies. ($14.95 SRP, 157 pages, published by Ultimate Orlando Press 2009)